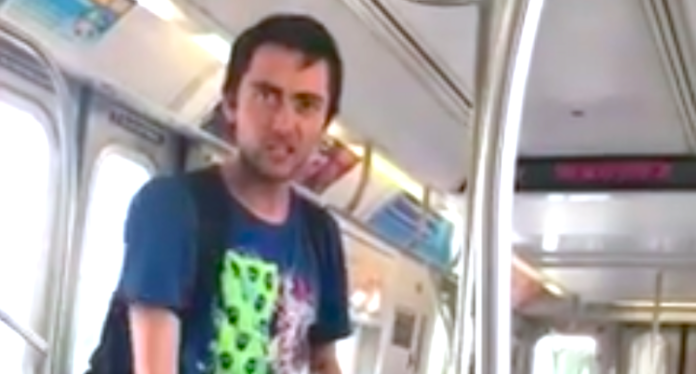 A video that has now been seen over 20, 000 times shows an unidentified man threatening to kill another passenger on the Q train in Brooklyn over her “Chinese eyes”. So shortly after the murders at the hands of a white supremacist Jeremy Joseph Christian in Portland under similar circumstances, one cannot be too careful, and the passenger under attack decided to capture the altercation.

So shortly after the murders at the hands of a white supremacist Jeremy Joseph Christian in Portland under similar circumstances, one cannot be too careful, and the passenger under attack decided to capture the altercation. Ironically- the victim of the racist tirade isn’t even Chinese and happens to be white.

The unidentified man approaches a woman sitting on the Q train in Brooklyn and begins yelling at her after she asked him to stop staring at her.

“Look at your f*cking eyes, you’re f*cking Chinese,” the man says, his own eyes darting. “Motherf*cker — get the f*ck out of my country before I murder your whole f*cking nation.”

The woman, who recorded video of the encounter, tells the man she’s white and not Asian.

He carries on undeterred.

“You know this is my country, right?” he says, and then reveals what sounds like an Eastern European accent. “You’re in my f*cking property. You are my property. I have the right to f*cking murder your whole f*cking nation.”

The man pronounces “property” with a long O, as in professional.

The video ends after the woman threatens to call police if he doesn’t get off at the next stop.

The woman targetted in the video did not file a police report because, she said, “I’ve heard of the police not taking cases seriously” and sadly noted: “Nobody on the train really spoke up”. A spokesman for the NYC Human Rights Commission told Gothamist that victims of harassment can file complaints with the CCHR hotline, at 718-722-3131,

What would you have done if you found yourself in such a situation, whether as the victim or a witness? Do you agree with the victim when she expresses that that law enforcement fails to take matters like this seriously enough, thus making victims feel at a loss when seeking help under such circumstances?

US Supreme Court Grants Last-Minute Stay of Execution for Ga. Man Convicted by a...

Email Prankster Fools White House Officials By Pretending to Be Priebus and Kushner –...

Four In Custody After Disabled Young Man Tied Up, Tortured On Facebook Live –...