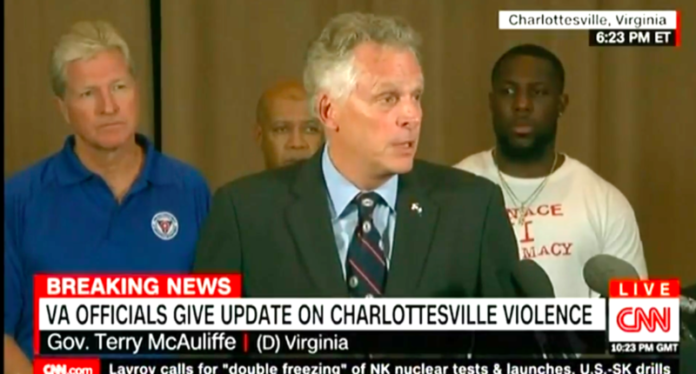 Virginia’s Gov. Terry McAuliffe sent a wonderful message to the white supremacists, neo-Nazis, and KKK members who gathered in Virginia to march in Saturday’s “Unite the Right” rally, which devolved into violence that left at least three people dead and many more injured.

After thanking the government workers who did their best to control the violence and help those who were injured, and thanking clergy for their work on Saturday, the governor tore into the hate groups that converged on Charlottesville, VA.

“Go home,” McAuliffe said. “You are not wanted in this great commonwealth. Shame on you.”

He continued, “You pretend that you’re patriots, but you are anything but a patriot. You want to talk about patriots, talk about Thomas Jefferson and George Washington, who brought our country together. You think about the patriots today, think about the young men and women wearing the cloth of our country. Somewhere around the globe they’re putting their life in danger. They’re patriots. You are not.”

“We work here today to bring people together, to unify folks. I remind you all that we are a nation of immigrants,” he said as he went on to discuss how immigrants made this country great.

Watch the great speech in the video below:

Agent Orange: 24 Chilling Photos Of The War Crime The US Got Away With