Home News WATCH: White Supremacists Chant ‘Jews will not replace us’ As They March... 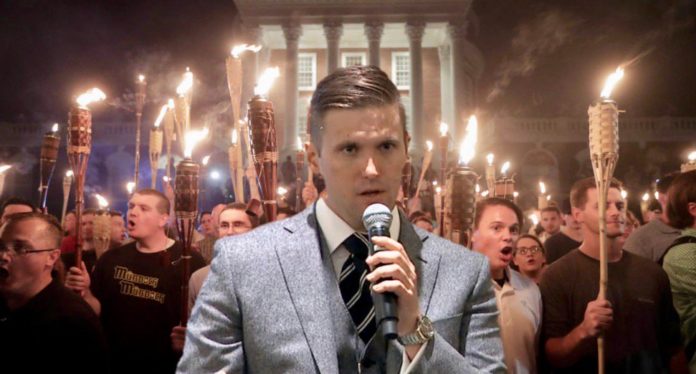 They marched towards the statue of Thomas Jefferson, where there was a much smaller group of anti-fascists.

When the torch-wielders reached and surrounded the counter-protesters there was a short verbal confrontation. Then the attacks began as the white supremacists attacked with torches, pepper spray and lighter fluid.

Emily Gorcenski was among the protesters who said they were hit with the mace spray. “[They] completely surrounded us and wouldn’t let us out.” She said the fascists surrounded them and would not let them out, and the police did not interfere, “I saw hundreds of people chanting Nazi slogans and police do nothing.”

Charlottesville’s mayor expressed outrage at the gathering of white nationalists.

“When I think of candlelight, I want to think of prayer vigils,” wrote Mayor Mike Signer in a Facebook post.

“Today, in 2017,” he continued, “we are instead seeing a cowardly parade of hatred, bigotry, racism, and intolerance march” in the hometown “of the architect of our Bill of Rights.”

The mayor gave a wonderful speech regarding the white supremacists at the rally Friday and Saturday: