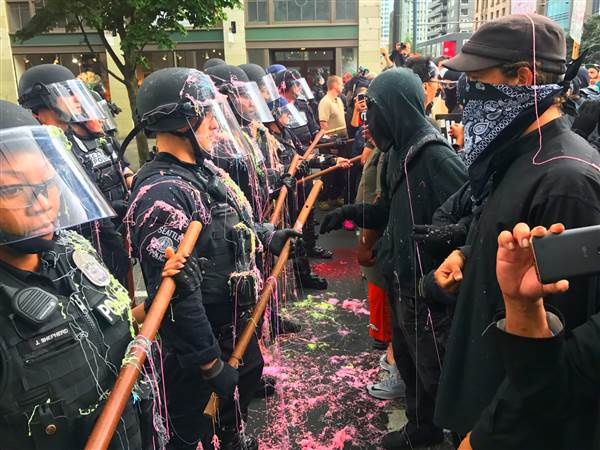 Police clashed with protesters in downtown Seattle on Sunday.

The counter-protesters carrying signs opposing hate and the KKK marched on Westlake Park on Sunday to meet a group at a pro-Trump “Freedom Rally,” reported Komo News.

Police said most were peaceful, but a few of the counter-protesters wanted to be prepared after seeing the violence brought by the white supremacists in Charlottesville, VA.

So they showed up dressed black, and some were carrying pieces of wood and other potential weapons. Police responded with lines of bicycle officers, pepper spray and blast balls. Police made three arrests.

There were no serious injuries reported.

Komo News reported on some of the events at the Seattle rally:

Police said a few protesters tried to get around traffic-control lines by running down an alley between Fifth and Sixth Avenues. They tried to use a makeshift shield to get by bicycle officers, and police responded with pepper spray, police said.

Bicycle officers were restricting the movement of protesters, and that created confrontations.

Police were trying to stop the marchers at Second Avenue and Pine Street.

Protesters chanted at police, “Who do you protect? Who do you serve?”

Police said someone in the crowd threw fireworks at police.

Officers used pepper spray and deployed blast balls. Then issued a dispersal order to protesters there.

“Whose street? Our street,” protesters chanted. “The cops and the Klan work hand in hand.”

A protest organizer told NBC affiliate KING that police attacked and blocked them from entering the rally.

“I think what they did today was actually a huge disgrace,” the unidentified organizer told the station. “Their job is not to protect Nazis.”

Seattle Councilman Mike O’Brien was with those protesters and among those stopped. The Associated Press reported that O’Brien says he texted Seattle Police Chief Kathleen O’Toole in the middle of the march and she told him demonstrators would not be allowed to proceed to Westlake Park.

Police said officers had confiscated several weapons, including boards and metal bars. Some protesters were also carrying balloons filled with an unknown liquid.

Many of the protesters then returned to Denny Park, where the “Solidarity Against Hate” began in early afternoon. Police said some protesters were throwing items at police who were providing traffic control.

Police put up barricades to separate the groups at Westlake.

At Westlake, there was an open mike, and dissenting views were being offered.

The 2 groups were shouting angry words at each other across the barricades as police kept the 2 groups from clashing.

By late afternoon, the pro-Trump protesters began leaving, and by 5 p.m., the crows at Westlake Park began to thin out.

The “Freedom Rally” was hosted by a group called Patriot Prayer. At least 200 people indicated they would attend on the group’s Facebook page.

Cop Strikes Down an 86-Year-Old Woman for Waving her Finger at Him During Anti-Trump...

New Evidence that Poor Americans Pay the Highest Taxes and Get Little of the...