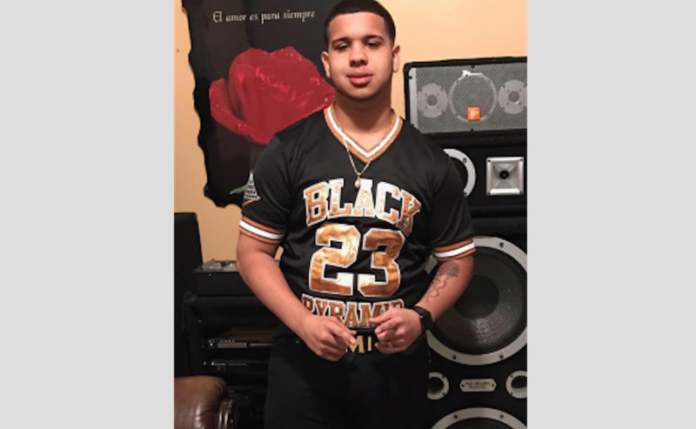 18-year-old  Luis Moux is facing charges of manslaughter for choking his mom’s ex-boyfriend to death after the young man allegedly tried to protect his mother from her attacker in the hallway of their apartment building Monday. The young man is said to be a “good kid” who was just tired of his mother’s ex- given that police have previously been by the apartment in the past for domestic incidents between Moux’s mother Lorena Sesma, and her ex-boyfriend, Stanley Washington.

18-year-old Luis Moux, who lives with his mother in the city’s Bronx borough, was in his bedroom at 4:30 a.m. when his mother, Lorena Sesma, 37, and her ex began arguing in the hallway outside the apartment.

Sesma retreated into her apartment as the situation apparently escalated, but the man, identified as 43-year-old Stanley Washington, followed her inside and began beating her.

Moux, who is an offensive lineman on the Grand Street Campus High School’s football team, came rushing to his mother’s aid, trying to pull Washington off his mother. As the teen tried to get the man off of her, he wrapped his arm around Washington’s neck, ultimately strangling the older man.

Sesma had reportedly passed out briefly after the incident but woke up to find her son standing over her ex. Moux was taken into custody, but officers are still working out whether the teen acted in self-defense.

“It’s not crystal clear,” a police source said. “It’s not cut and dry. There was a battle going on back and forth. It could be self-defense, but that hasn’t been decided yet.”

According to the New York Post, Washington had a long criminal history that included 26 prior arrests. Police also said that they had been to the apartment several times to deal with domestic disputes.

“He’s a school kid, a good student not involved with drugs or hanging out with bad people,” neighbor Angel Nives said of Moux to the Daily News. “He loves playing basketball and football with his friends over in the next building. When I heard the news, I didn’t expect it to be him, but he was right to defend his mother.”

Sesma previously obtained a restraining order against the ex-boyfriend, relatives said, but it was unclear whether it was served. “That man used to beat her constantly,” the teen’s aunt, Angela Carrasquillo, said of Washington. “She always had bruises on her face. He even assaulted my mother before. He punched my mother in the back of the head.” Moux’s lawyer. Walter Fields insists the teen “did nothing wrong”. “Some animal tried to hurt his mother and he did what any good young man would do,” Walter Fields said after the brief court appearance. “This is the kind of kid that we’d all be proud to call our son.”

The teen is now out on bail.

Moux claims that the alleged killing was in self-defense, given Washington’s history with Sesma- do you believe that to be true? Do you think that the charge of manslaughter will stick or should Moux be able to walk free as a hero for saving his mother? Share your thoughts in the comment section below.

This International City In India Is Void Of Politics, Religion And Money – Anti...