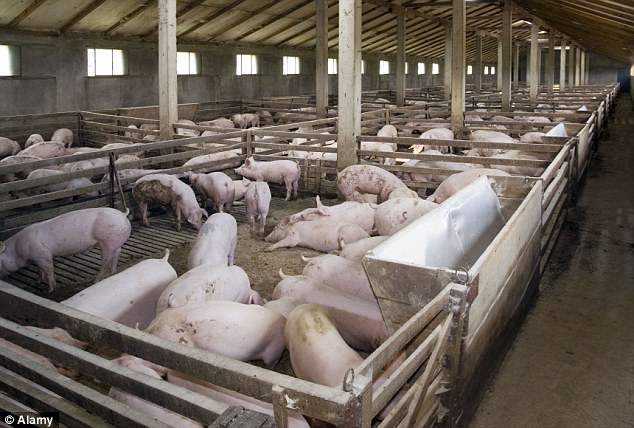 A major British supermarket appears to have infected thousands of people with a pig virus that causes liver cirrhosis and neurological damage, say researchers at Public Health England. Bu that is nothing compared with the 150,000 to 200,000 that are infected each year in the UK.

Hepatitis E (HEV) is transmitted by sausages and pork products from Europe, mainly Holland and Germany. UK pigs allegedly do not have the virus strain in question, according to The Sunday Times.

Scientists at PHE, a government agency, have traced the shopping habits of infected people and found that a common factor is consumption of store-brand sausages from “Supermarket X”.

PHE and the Food Standards Agency (FSA) have refused to name Supermarket X but two separate sources said it was Tesco, according to the Times.

Two previous PHE studies going back to 2011 also pointed at Supermarket X’s pork products as a key source of the virus — although they also did not name the retailer.

In 2014, Daily Mail reported that official research suggests one in ten sausages could be carrying hepatitis E.

The new research, whose authors include Bengu Said and Professor Richard Tedder of PHE’s National Infection Service, began in 2014 and was completed early in 2016 but concern over its “sensitivity” meant it was published only this summer. It estimates that imported pork infects 150,000-200,000 Britons a year with the virus (official name HEV G3-2).

The number has risen so fast that NHS Blood and Transplant has started screening all blood donations and is about to do the same for donated organs and tissues.

“The implicated products are pork sausages, which require cooking prior to consumption, and ready-to-eat pre-packed sliced ham,” said the paper, which was based on tracing the food purchases of 60 infected people.

After looking at different brands of sausage they concluded that: “Only Supermarket X, especially own brand, was significantly associated with HEV G3-2.”

Tedder said it was an issue for the whole industry: “Something appears to have changed in animal husbandry so too many pigs are infected at slaughter. This is a problem for meat producers and all retailers, not just one.”

The Times said most infected people suffer few symptoms but some develop serious illness. especially anyone who may have a suppressed immune system.

Roy Van-Den-Heuvel of Falmouth, Cornwall, suffered a paralysed diaphragm after getting the virus from infected Dutch salami. “I had to go into intensive care and I still have not recovered,” he said.

Tesco would not comment on the study but confirmed that it had held talks with the FSA on minimising the risk from HEV: “We work closely with the FSA and PHE so customers can be confident in the safety of our food.”

Harry Dalton, a gastroenterologist at Exeter University, said: “In the past four years the number of HEV cases I see has surged. Three of my patients have died from HEV, all were older men with pre-existing liver damage.”

If you choose to eat sausages or any meat that could possibly be infected with this or other viruses, you can lessen the risk of contracting a potentially deadly virus by making sure the meat is cooked thoroughly. Of course, as long as people choose to eat this type of meat, the risk will be present.