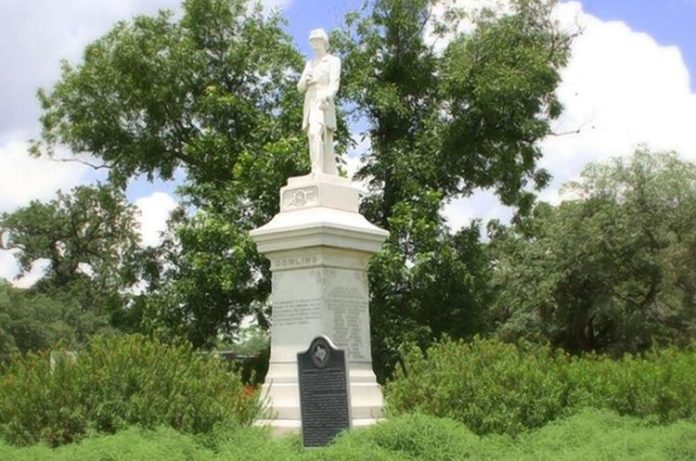 One Texas man wasn’t happy with the lack of confederate statue removal, so he decided to take matters into his own hands.

The 25-year-old Houston man was arrested after officials say he was caught trying to plant explosives on a Confederate statue at a local park, reported ABCNews.

Andrew Schneck was caught Saturday evening near a statue of Confederate Lt. Richard Dowling in Hermann Park. A Houston park ranger found Schneck with two boxes with duct tape and wires as well as a bottle and a small tube of compounds that tests later revealed to be explosive materials, namely nitroglycerin and hexamethylene triperoxide diamine, a criminal complaint read.

“When asked by (the park ranger) if he wanted to harm the statue, Schneck responded that he did, and that he (Schneck) did not ‘like that guy,’” the complaint read.

When confronted by the park ranger, Schneck drank from the bottle that contained the nitroglycerin, but had to spit it out, before pouring the liquid onto the ground, authorities said.

A Houston police bomb squad said that a timer, wires connected to a homemade detonator, battery and the hexamethylene triperoxide diamine found on Schneck “were capable to produce a viable explosive device.”

The 25-year-old also admitted to police that he had other chemicals in his home, officials said. On Monday, houses near his home were evacuated as authorities worked to discard the materials found in his home.

Schneck is now facing charges of attempting to maliciously damage or destroy property receiving federal financial assistance, and will remain in federal custody until a hearing Thursday.

He had previously pleaded guilty in 2015 for improperly storing explosive materials in his home and was sentenced to five years of probation. Last November, a federal judge approved a motion by Schneck’s lawyers for early termination of his sentence, with his attorney insisting that he is “not a risk to public safety” and that “his focus is no longer concentrated on high-risk activities.”

Okla. Mayor Apologizes After Husband, Friends Dress Up As KKK To Scare Kids For...

Family Comes Home From Church, Finds Dog Bleeding Out On The Porch Along With...

Poverty in America Once Again Ignored in 2016 – Anti Media News