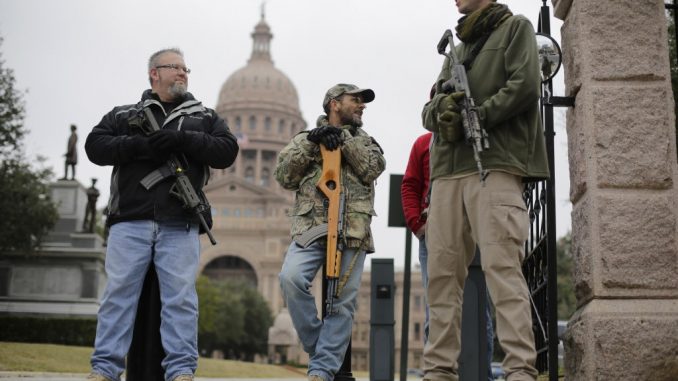 Police in Texas have warned  protestors that if they attempt to destroy or vandalize statues, gun owners can shoot them on sight.

According to Texas police academy instructor, Phil Ryan, citizens can use deadly force to stop Antifa and BLM protestors from destroying any monuments or statues in their state.

Libertyparkpress.com reports: “As a police officer and police academy instructor, I am posting this as a public service announcement.”

Texas Police Academy Instructor Phil Ryan warns all Antifa and BLM protesters, and anyone else interested in defacing their state statues, that if they bring their attitude to Texas, they could end up dead.

As a police officer and police academy instructor, I am posting this as a public service announcement.

In Texas, Criminal Mischief (Vandalism) is a crime. So, let’s say someone is defacing or destroying a monument or a statue, not that it happens, just a hypothetical. That would be Criminal Mischief under Texas Penal Code:

Texas Penal Code Chapter 9, which are the laws concerning the use of force and deadly force to protect yourself, someone else, your property, or someone else’s property (could be state, county or municipal property (the peoples). In Chapter 9 under defense of property it says:

Sec. 9.43. PROTECTION OF THIRD PERSON’S PROPERTY.
A person is justified in using force or deadly force against another to protect land or tangible, movable property of a third person if, under the circumstances as he reasonably believes them to be, the actor would be justified under Section 9.41 or 9.42 in using force or deadly force to protect his own land or property and:
(1) the actor reasonably believes the unlawful interference constitutes attempted or consummated theft of or criminal mischief to the tangible, movable property;

Chapter 9.41 states: PROTECTION OF ONE’S OWN PROPERTY.
(a) A person in lawful possession of land or tangible, movable property is justified in using force against another when and to the degree the actor reasonably believes the force is immediately necessary to prevent or terminate the other’s trespass on the land or unlawful interference with the property (Criminal Mischief is unlawful interference with property).

Chapter 9.42 states: DEADLY FORCE TO PROTECT PROPERTY.
A person is justified in using deadly force against another to protect land or tangible, movable property:
(2) when and to the degree he reasonably believes the deadly force is immediately necessary:
(A) to prevent the other’s imminent commission of arson, burglary, robbery, aggravated robbery, theft during the nighttime, or criminal mischief during the nighttime (Night time is 30 minutes after sunset until 30 minutes before sunrise).

Bottom line, if someone is destroying a monument or statue that isn’t theirs, you can defend it by force during the day with deadly force at night.

Before The EPA, Our Cities Looked Like This – Anti Media News

Texas Cop Shoots Man In Back, Falsely Claiming His Life Was In Danger –...

Hidden Camera Catches Cop Force a Man to Give Him Money by Threatening to...