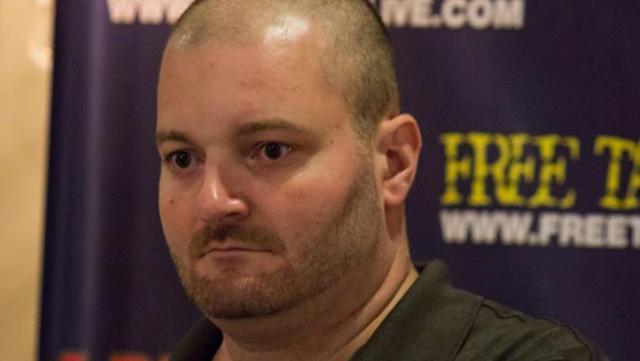 Albermarle County police department confirmed Chris Cantwell was arrested just before 2am Monday morning at a bus stop near the town of Esmont.

AMS reported on the interesting chain of events that led the famous white supremacist to this point.

“For a few triumphant hours, Cantwell was the thick-armed embodiment of white nationalism to tens of millions of people – the star of VICE News and HBO’s Web documentary about last weekend’s rallies, which has been seen more than 30 million times.

He looked every bit the rebel leader in that footage from Friday night and Saturday, greeting other white nationalists from as far away as Canada; marching by torchlight to the statue of Confederate Gen. Robert E. Lee; screaming “Jews will not replace us!”

“I carry a pistol. I go to the gym all the time,” Cantwell tells the camera, muscles bulging beneath a shirt that advertises his blog, which in turn advertises Cantwell as a libertarian “fascist.”

“I’m trying to make myself more capable of violence!” he says.” – Denver Post

This picture painted by the Denver Post is exactly what we all thought of this self-proclaimed Neo Nazi. At first glance it all seems expected. Neo Nazi talks a big game and gets a big scary reputation. But then things took a surprising turn.

In the video below you can watch Chris Cantwell’s reaction to finding out there was a warrant put out for his arrest, versus how he acted on camera for HBO’s Vice:

A quote from Chris Cantwell as he chokes back tears- “We are trying to make this peaceful, we are trying to be law abiding, and our enemies will not stop, what options do we have left?”

Trying to make what peaceful? Your assertion that Whites are superior? Does a car jacker get a medal for peacefully stealing a car? What you are doing is still disgusting you narrow minded twat. And the fact that you are crying over this like you just got screwed in a game of Mario Party? What options do you have left? You can stop being a piece of shit for starters. You can please guilty since Chris Cantwell arrested and charged is what everyone always wanted.

The way he talks about dying for the cause like it is nothing, and then the cut away to him sniffling over an arrest warrant really shows just how pathetic this guy is.

But it does raise a question.

Why would he act so tough for HBO if in reality he is just a little wimp? He was literally saying the driver who ran over protesters was justified. That kind of rhetoric is as far alt-right as it gets.

So does he not understand the magnitude of his statements here? Or does he just think it doesn’t matter and he can say whatever he wants on an HBO documentary with no repercussions?

It’s interesting to hear someone talk so casually about other people dying, and then see him literally crying over the thought of himself dying. Hypocrite is probably the word that applies here.

NC Grand Jury Refuses To Charge Cop Who Body Slammed And Gave A 15...