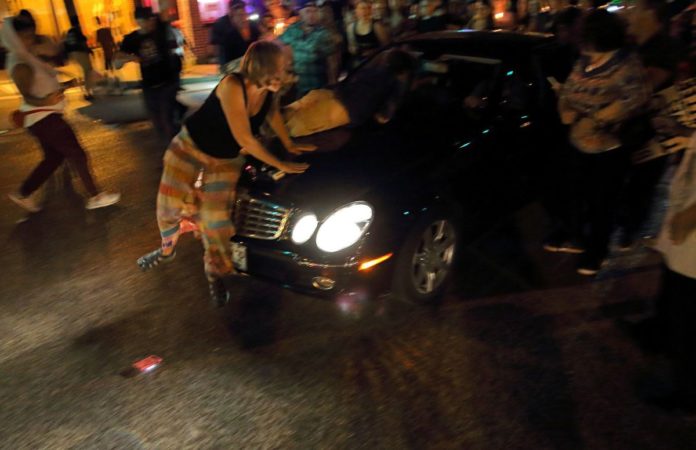 In St. Louis, Missouri, 3 protesters were injured by a vehicle Wednesday night while marching in remembrance of Kiwi Herring, a transgender woman who was shot dead by police earlier this week.

The details of how exactly the driver came to strike the protesters remains unclear as police and a witness are giving very different stories about what exactly happened when the motorist drove through the group that had blocked an intersection, reported St. Louis Post-Dispatch.

Keith Rose, a witness with an up close view of the incident, told the Post-Dispatch the driver had his middle fingers up before he accelerated through the crowd of protesters blocking the intersection.

The St. Louis police version says the driver stopped, honked and attempted to drive around the protesters before some of them began to surround his car and hit the vehicle with their hands and a flagpole.

Police spokesperson Schron Jackson said 3 protesters were injured after they jumped onto the car and fell off when the driver pulled away from the scene.

Jackson said the motorist was taken into custody after initially refusing to stop for officers. The protesters suffered only minor injuries, according to officials.

The protest in the street began shortly after a vigil in Herring’s honor that was held at the nearby Transgender Memorial garden.

Herring was shot and killed by St. Louis police officers Tuesday following a call about someone with a knife. Officers who got to the scene confronted Herring, who was holding a knife and then refused to drop the weapon. Authorities say she stabbed a neighbor and then turned her knife on an officer who responded to the incident, also injuring him.

CT Republican Arrested For Grabbing Woman’s Genitals, His Lawyer Says It Was “A Playful...