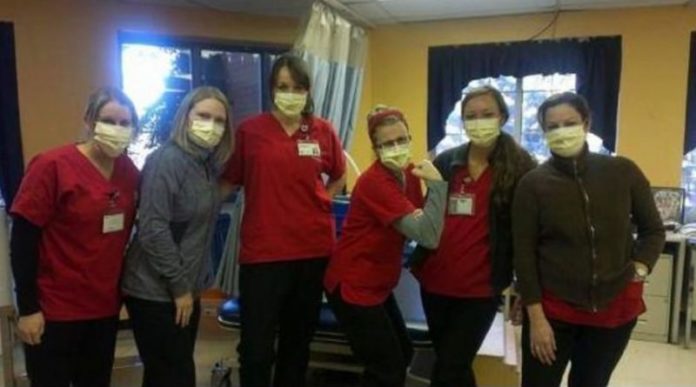 Nurses are taking a stand against mandatory vaccinations, at the risk of losing their jobs.

Over 22,000 nurses are a part of Nurses against Mandatory Vaccines (NAMV), a movement that wishes to create awareness of the current oppressive vaccine stance the hospitals and the government are taking, reported EcoNewsMedia.

Pro-choice nurses who have refused the flu vaccine are being forced to wear face masks when working on the wards, they are claiming this is an infringement of their constitutional rights.

The flu vaccine’s integrity has been called into question on numerous occasions, the Center for Disease Control (CDC) even admitting that it sometimes doesn’t work.

While the government itself does not require mandatory vaccination policies, many if not all are taking an “all or nothing” stance against their workers. Healthcare workers are now facing being fired if they refuse a flu vaccine. Not only is this a human rights violation, it is also an EEOC violation.

Even a pro-vaccine doctor Dr. Karen Sullivan Sibert has spoken about how the rule violates HIPAA law.

The safety of vaccines has been a source of speculation in recent times, with vaccines often containing dangerous ingredients that are known to cause adverse reactions in some cases, according to the CDC.

Knowing what we know about the intrinsic way the government and Big Pharma are linked, it might come as no surprise to know that hospitals are required to have over a 90% flu vaccination rate among their staff or they are punished by losing 2% of their funding.

It is good to see medical workers standing up against forced unnecessary medical procedures.