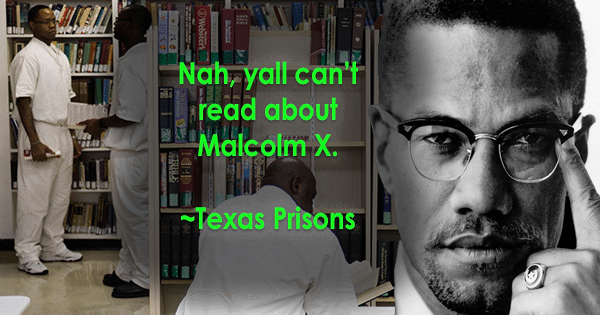 If you’re one of the nearly 150,000 prisoners locked up in Texas and you like to read, you’re gonna have a bad time, as the Texas Department of Criminal Justice bans nearly 15,000 books.

Hoping to read The Color Purple, Friday Night Lights, or Dante’s Inferno? You’re out of luck. If you want to read Hitler’s Mein Kampf​ though, you’re all good. A fan of former KKK leader and white supremacist David Duke or Che Guevara’s Guerrilla Warfare? Those are fine too.

Malcolm X once said, “My alma mater was books”. Now why would Texas want to ban a man that preached about research and reading? Oh, I know. Because Malcolm didn’t take bullsh*t from anyone and definitely wasn’t for white supremacy. He wasn’t fit to be a slave once he woke up. And we all know the dangers of what would happen if black men in jail all woke up.