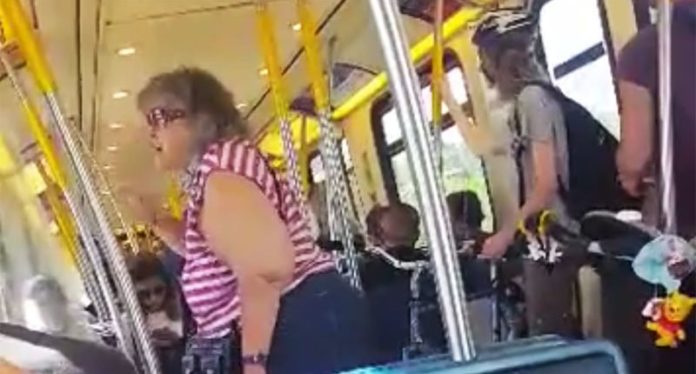 Video footage was captured on a Vancouver SkyTrain showing a white woman’s racist tirade at a Filipino couple which was quickly redirected by a teenager who told her knock it off and get off at the next stop.

The video was posted to Facebook by Ashley Klassen, who wrote, “This is probably the most disgusting thing I’ve ever seen. Unfiltered Vancouver racism. Shout out to the kid up front.”

According to witnesses, the unidentified woman went off on the couple because she thought they were speaking too loud on the crowded train, reported Raw Story.

“I was born and raised right here. Go back to the f*cking Philippines,” the woman yelled at the couple.

As the woman continued to berate the couple, a teenager stood up for them, telling the woman to leave them alone and get off the train.

The woman then turned her rage on the teen, calling him “a loser,” and raging at him, “You f*cking little boy –you think you’re so big.”

The woman got off the train at the next stop. However, Transit Police are familiar with her and her outbursts. She has previously received warnings.

“She becomes extremely angry, uses her temper and does various things in the throes of her anger. There’s no physical violence involved but it appears to be more verbal,” explained Transit Police spokesperson Ann Drennan.

Even though they did nothing wrong, other passengers on the train apologized to the couple after the woman departed.

Shock Report: More Americans Killed by Police Since 9/11 than Soldiers Killed in War