Home News Is the War in Afghanistan to Combat Terrorism or to Protect Exploding... 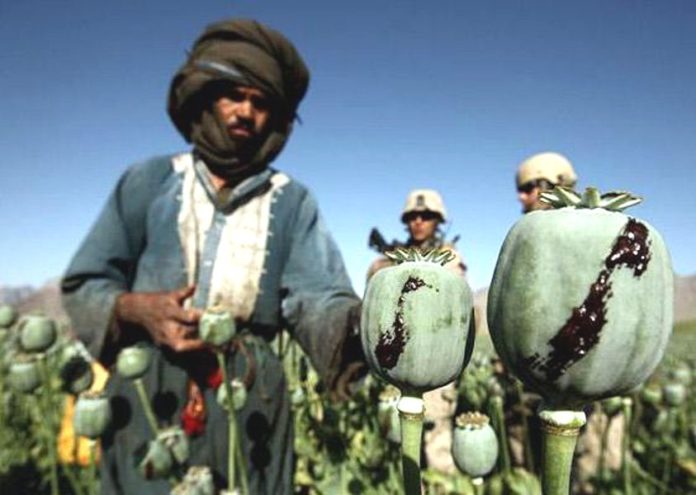 Afghanistan’s US and UK militarily-protected opium accounts for nearly 90% of the world’s trade of this crop. Are we to believe that an ongoing war in Afghanistan is to keep terrorism at bay, or are there other economic motivators?

Farmers in Afghanistan that grow opium have enjoyed a 35-fold increase in production while the U.S. suffers from one of the largest opioid crises in the history of mankind – but who is really promoting drug deals in Afghanistan and Iran? If the Taliban is one of the largest dealers in opium, then why is the U.S. bankrolling its further cultivation?

Some of America’s greatest dynasties, along with China’s were created with the opium trade. British rulers were some of the biggest opium drug dealers of all time, but the U.S. may be secretly forcing that title to one of secondary importance.

President Trump just stated in an address to the US, near Fort Meyer, “We will ask our Nato allies and global partners to support our new strategy with additional troop and funding increases in line with our own – we are confident they will.” He has asked that 4,000 more troops be sent to Afghanistan, ad asks Britain to follow his lead.

Historically, European and American traders made serious pay dirt by acquiring “black dirt” – slang for opium money. The British struck an ingenious way to overcome a trading deficit in the Middle Ages by bribing Chinese officials to allow opium chests filled to the brim into their country. – which came primarily from British-controlled India. Imports then soared, and almost every American company grew rich by becoming agents for Indian producers.

As the U.S. says that we will “keep Afghanistan prosperous,” they are employing similar tactics as those used for hundreds of years by colonizing powers.

Guess where America gets all its opium from? Afghanistan – where it grows like a weed. The opioid crisis is very real, and the supply comes almost entirely from one country.

According to the US centers for Disease Control and Prevention the production of opium in Afghanistan shows no signs of slowing while heroine deaths in the U.S. have quadrupled.

“Afghanistan has roughly 500,000 acres, or about 780 square miles, devoted to growing opium poppy. That’s equivalent to more than 400,000 U.S. football fields — including the end zones,” John Sopko, Special Inspector General for Afghanistan Reconstruction, said in a speech in May.

The U.S. has spent $8.4 billion in counternarcotics programs in Afghanistan, yet opium output is stratospheric: Fifteen years ago, Afghanistan accounted for just 70 percent of global illicit opium production – it’s now pretty much taken it over.

As with all excuses given for militarization and war, we must be vigilant to look for the deeper reasons.

The failed U.S.-billion-dollar “war on drugs” is nothing more than a promotion of the wars we see being carried out now. We’ve already spent more than $700 million on a war in Afghanistan, but make no mistake, the profits of supporting the opium trade are much higher.

Officials in the ministry of counter-narcotics of Afghanistan have stated that the annual turnover value of drugs trade in Afghanistan has reached to $70 billion where the majority of the opium money goes to international opium smugglers.

The annual value of the current opium trade is at least $70 billion and growing – so what’s another few thousand troops, and some war toys provided by the American taxpayers?