Home News Witness the Power of Remaining Silent—Woman Gets $30K After Cops Ignore the... 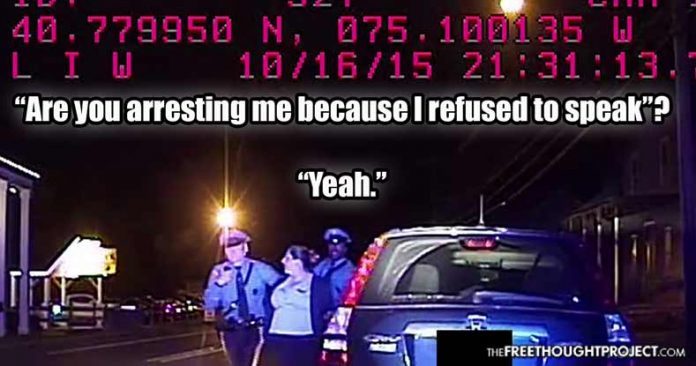 Trenton, NJ — Rebecca Musarra was pulled over by two New Jersey state troopers after they suspected her of speeding in 2015. However, because the troopers were ignorant of the Constitution, and Musarra’s right to remain silent, the traffic stop took a turn for the worse and now the taxpayers are being held liable.

The troopers’ careless disregard for the law was subsequently captured on dashcam showing them arrest this woman for the sole act of practicing her constitutional right to remain silent.

Now, according to court records, Musarra has been awarded $30,000 in a settlement with the state.

Musarra, a Philadelphia attorney, put her right to remain silent to the test after she was pulled over for allegedly speeding on Route 519 in Warren County — and ended up in a holding cell for it.

In a recent interview, Musarra said she hoped the case, which drew national attention after it became public, would become a civil liberties lesson for police and members of the public.

“Hopefully this gives average citizens a little more courage to assert their rights,” she said.

Troopers Matthew Stazzone and Demetric Gosa had apparently never cared enough to read the 5th Amendment to the Constitution which states:

“No person shall be held to answer for a capital, or otherwise infamous crime, unless on a presentment or indictment of a grand jury, except in cases arising in the land or naval forces, or in the militia, when in actual service in time of war or public danger; nor shall any person be subject for the same offense to be twice put in jeopardy of life or limb; nor shall be compelled in any criminal case to be a witness against himself, nor be deprived of life, liberty, or property, without due process of law; nor shall private property be taken for public use, without just compensation.”

At 9:30 pm, on October 16, 2015, trooper Stazzone began to berate the innocent Musarra for lawfully remaining silent after being pulled over for speeding. Musarra gave Stazzone her license and registration and then said nothing else.

“While you’re looking for that, do you know why you’re being pulled over tonight?” the trooper asked her, according to the dashcam.

After asking several more times and not receiving an answer, Stazzone became agitated that his authority could not compel this innocent woman to speak. So, he walked to the other side of the car and began to bang on her window with his flashlight—until it broke.

“You’re going to be placed under arrest if you don’t answer my questions,” he said, in a clear violation of the Constitution.

After several awkward moments, Musarra eventually tried to explain to the uneducated trooper that she was an attorney and she was not required to answer questions. Unfortunately, her attempt to lessen the officer’s ignorance resulted in him throwing a temper tantrum, ordering her out of the car, and placing her under arrest.

“Are you detaining me because I refused to speak?” asked Musarra as the two troopers violated her rights.

To make this unlawful arrest even more moronic, the benighted Stazzone then read Musarra her Miranda rights—including “you have a right to remain silent.”

Musarra was then kidnapped and hauled off to the State police station in Washington.

According to her lawsuit against the New Jersey state police, she was patted down multiple times and thrown into a holding cell where she was handcuffed to a bench. The lawsuit also states Musarra was denied a request to call her parents multiple times.

Musarra explains that the supervisor, Trooper James Butler then walked into the cell and asked her what happened.

“I said, ‘Well, the trooper arrested me for not answering his questions,’” Musarra told NJ Advance Media. “And the supervisor indicated (to me) that was obstruction.”

While Stazzone and Gosa could have claimed their rookie status as a reason for being so brutally unaware of the law, the supervisor had no excuse.

After viewing the dashcam footage of the incident, Musarra says Butler came back to the cell and said, “a mistake was made, and to chalk it up to training, and that (Stazzone) was just a rookie.”

Butler then offered to get Musarra’s car, which had been towed, out of impound as a “favor.” Musarra was never charged with obstruction nor was she given a ticket for the stop. She had been kidnapped and held hostage for the sole reason that these cops were clueless.

“There has to be some sort of accountability,” Mussara told NJ Advance Media at the time. “Who knows what will happen to the next person who comes down the road who decides they have these constitutional rights they want to assert?” Musarra said. “What happens to them when they don’t have the sort of privileges I have?”

In regards to the incident, State Police spokesman Capt. Stephen Jones said in an e-mail, “in every instance where misconduct is alleged against a trooper or troopers, as is the case here, (the division’s internal affairs office) will review the allegations and investigate the facts.

“In the event that problems are identified, training and/or disciplinary measures are implemented where appropriate.”

However, when specifically mentioning the actions of the troopers, attorneys for the state claimed they “acted in good faith and without fraud or malice,” — in spite of the fact that they obliviously kidnapped an innocent woman for merely knowing the law.