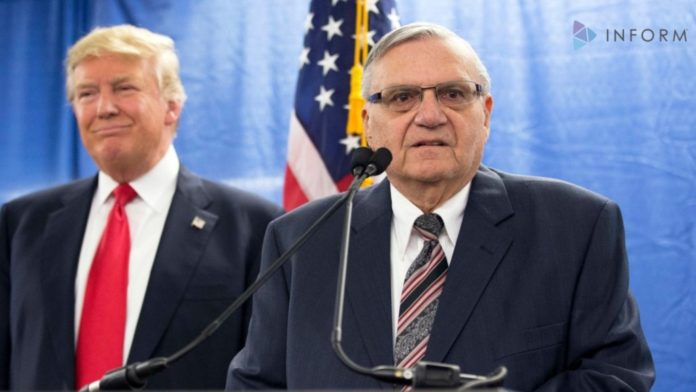 The German filmmaker who produced a 2001 documentary about Maricopa County, AZ’s former sheriff Joe Arpaio said that the right-wing sheriff is “evil to the bone.”

President Donald Trump’s controversial pardon of Arpaio is no surprise, she said, because he and Trump are “soul-mates” — strutting attention addicts with no remorse or empathy, reported Raw Story.

In an article for The Daily Beast, Marianne Schaefer Trench said that Arpaio preened for her crew’s cameras and the entire enterprise made them “feel dirty” because they were only feeding Arpaio’s ego.

Arpaio is so unbelievably evil, that when the documentary aired in Germany, viewers thought they were watching a comedy “mockumentary,” but then realized that what they were seeing was real.

Trench initially had difficulty getting funding for the documentary because no one believed that abuse like Arpaio’s was being allowed to take place in the United States. Now, of course, many people realize it was not only taking place, but it is completely supported by the current president.

“They had trouble believing that his kind of law-enforcement abuse was really happening, and, if so, they weren’t confident I would able to capture it on camera,” she said. This proved to hardly be the case.

“There was no problem getting the man to cooperate,” Trench wrote. “He craved the spotlight and behaved obnoxiously to satisfy the camera. Despite his cooperation, the filming became more difficult by the day because my crew developed such disgust and hatred for the man that I feared they would turn violent. We all started to feel dirty because we realized in some sick way we were feeding his oversized ego.”

She detailed the millions of dollars in taxpayer money Maricopa County has lost in litigation related to Arpaio and his abuses of human rights, many of which are now notorious.

“One inmate, Scott Norberg, died in the restraining chair,” she wrote. “The Phoenix New Times compared the video material to watching a snuff film.”

Trench continued, “At least 60 people died in Arpaio’s county jail and many more got injured. Richard Post, a paraplegic, was pulled out of his wheelchair and cinched violently into a restraint chair, causing permanent damage to his neck and shoulders. At the time of my film project there were already hundreds of lawsuits against all of the sheriff’s divisions, and the department had amassed to a total of $14.7 million in settlements in the previous five years.”

When her documentary “Sheriff Joe: The Toughest Lawman in America” premiered on German TV, people thought they were watching a comedy.

“Viewers wrote angry emails to the TV station, asking for more information on why and how this is allowed to keep going on in a First World country. Germans wanted to have Arpaio tried in The Hague, and they were convinced that his behavior was unconstitutional. Some even suspected that the film was staged, a fictional mockumentary about the U.S.,” Trench recounted.

Nonetheless, he was Maricopa County Sheriff for 24 years, finally getting voted out of office in November of 2016.

“For the abuse, the racial discrimination, the killings and mistreatment of prisoners, Maricopa County was held responsible — never the sheriff himself,” she said.

She concluded, “It’s not surprising that Arpaio is Trump’s soul mate. In my mind, the real scandal is that I met this man 16 years ago and knew he was evil to the bone. Yet he stayed in office and was able to flout the law, the Constitution, and basic human rights for 24 years. And he doesn’t have to pay for any of it.”

Cop Was Not Fired Despite 75 Counts of Stalking and Harassment — Now He...

7yo Autistic Boy Cuffed, Kidnapped By Police, Held For 6 Days – For Acting...