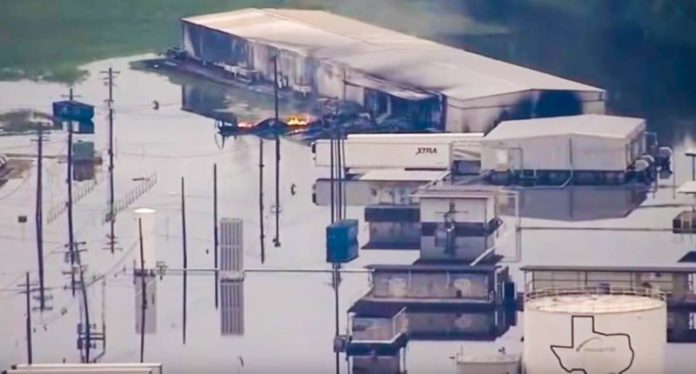 Arkema, the company that owns the chemical plant in Crosby, Texas, that suffered at least two separate explosions on Thursday and is  spewing “noxious” smoke, successfully lobbied the Trump administration to delay new safety rules for chemical plants that should have taken effect this year.

With the Trump administrations anti-Obama fixation, they undid work that may have helped prevent multiple explosions and noxious fumes from spewing into the air during the hurricane.

Obama-era regulations of chemical plants that were supposed to take effect this past March 14 “were halted by the Trump administration after a furious lobbying campaign by plant owner Arkema and its affiliated trade association, the American Chemistry Council, which represents a chemical industry that has poured tens of millions of dollars into federal elections,” reported The International Business Times.

Arkema directly objected to the new proposed rules in a letter it sent to the EPA this past May, in which it said the rules “will likely add significant new costs and burdens to the corporate audit process.”  The Trump administration has continued its support of business profits over safety.

According to the IB Times, Arkema specifically took issue with new “Safer Technology and Alternatives Analysis” (STAA) rules that would have, among other things, encouraged companies to “simplify covered processes in order to make accidental releases less likely or the impacts of such releases less severe.”

“Arkema has six production plants in Texas and has received more than $8.7 million worth of taxpayer subsidies from the state. Arkema’s Crosby plant — which OSHA fined more than $90,000 for ten “serious” violations earlier this year and has spewed smoke in Crosby — appears to be covered under the existing EPA rules because of the kinds of chemicals it uses. While Texas Republican Gov. Greg Abbott has given chemical companies legal cover to hide the locations of their EPA-regulated chemicals, the Associated Press reports that the imperiled Arkema facility houses large amounts oftoxic sulfur dioxide and flammable methylpropen, which required Arkema to submit a risk management plan to the agency —  and which would have subjected the company to the strengthened safety rules,” reported IB Times.

U.S. Citizen And Father of 4 Was Imprisoned By ICE For Nearly 2 Years...