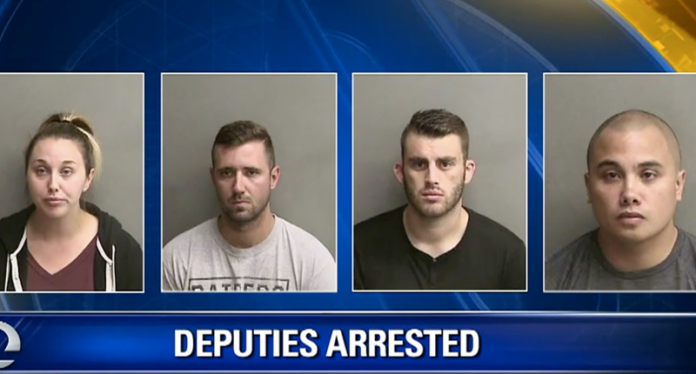 Four Alameda County Sheriff’s Department deputies have been arrested following an investigation after jail staffers blew the whistle on the deputies who allegedly allowed inmates to spray feces and urine at one another in the jail. Sarah Krause, Justin Linn, Erik McDermott and Stephen Sarcos, were released on bond after being arraigned on their charges related to the incident. Sheriff Greg Ahern wishes to make an example out of the four deputies who will soon be fired, so it may be known that the agency is “embarrassed, shocked, and ashamed ” that this abuse was allowed to happen.

“Several Alameda County Correctional deputies are under arrest, and soon to be fired, for alleged misconduct at the Santa Rita Jail in Dublin,” KTVU reports. “The charges involve allowing, even directing, inmates to pelt other inmates with urine and feces.”

The practice is known as “gassing” or “chucking” in prison slang.

All four posted bond and were released from jail.

“It has shocked the conscience of our entire agency, it is a terrible event,” Sheriff Greg Ahern told KTVU. “It can’t be explained, it can’t be understood, we are embarrassed, shocked, and ashamed and that’s why we took such harsh actions.”

Even the public defender assigned to the case said he was “horrified and appalled” by the allegations.

“Misconduct like this should never be tolerated,” Brendan Woods said. “Our office will cooperate in any way necessary to ensure that these deputies are held accountable and that this abuse does not continue to happen.”

An inmate who identified himself as Ruben Febo Jr. wrote a whistle-blower letter to the East Bay Times

What may be the worst part of the abuse was that those the deputies targetted were the most vulnerable inmates, with no one on the outside to relay to about the abuse.

“I was placed into a cell that was saturated in feces from the floor to the ceiling and all over the bunk beds,” Febo wrote. “I was made to go into this cell involuntarily.”

Febo wrote deputies target inmates who “had no family to tell” or “lacked to capacity to speak up for themselves.

“I (bore) witness to an inhuman living environment, illegal criminal procedures/practice at the hands of many housing deputies and an inmate in which the deputies utilized to help carry out torture/torment tactics upon these inmates in these pods,” Febo charged.

“That’s not surprising at all, there are horror stories. That’s one of the lighter ones,” the wife of an inmate told KTVU.

None of the incidents were captured by prison guard body cameras.

The officers used their position of power to debase inmates and took advantage of the most vulnerable for no other apparent reason than to exert their power over someone they deemed “lesser than”. Although the victims are inmates, they are still privy to humanity and should have never been made to endure the conditions under which they lived.

Do you think that if other jail staff did not come forward that the scandal would not have been exposed? Clearly, there is a known history of abuse exposed inmates and their families- so why is it only know something is being done? Let us know your thoughts on the matter in the comment section below.

Watch KTVU coverage of the scandal:

The Right-Wing Doesn’t Want To Talk About Christian Atrocities, So Let’s Talk About Them...