Home News Maine Governor Says ‘You shoot at the enemy’ and ‘People of color’... 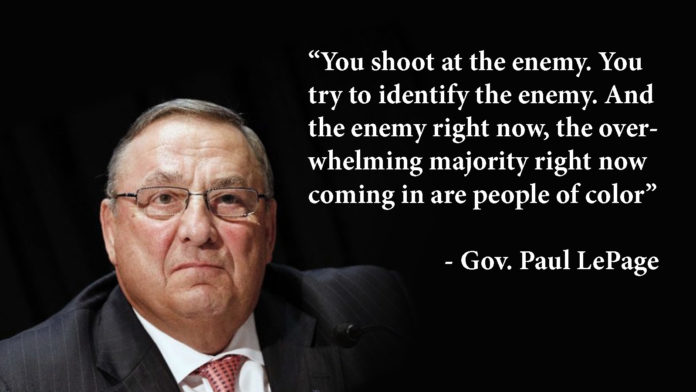 A video clip from the Republican Governor of Maine, Paul LePage makes it clear that he sees non whites as enemies.

The video clip, which was recorded at a small press conference, and can be seen below. It shows Lepage going off on a rant about people of color and immigrants.

“A bad guy is a bad guy. I don’t care what color he is. When you go to war, if you know the enemy, the enemy dresses in red and you dress in blue, you shoot at red,” he said. “You shoot the enemy. You try to identify the enemy. And the enemy right now, the overwhelming majority of people coming in are people of color or people of Hispanic origin,” LePage was recorded saying.

.@Governor_LePage calls people of color the “enemy” in an attempt to apologize for homophobic & racist remarks. pic.twitter.com/ug0oi9Jutn

The American Civil Liberties Union of Maine had pointed out that research shows blacks and whites deal drugs at similar rates.

“According to the governor, Maine police are nine times more likely to arrest people of color for selling drugs than white people, even though we know white people are just as likely to commit drug offenses,” Alison Beyea, executive director of the ACLU of Maine, said in a statement. “This alarming disparity in arrests raises significant concerns that Maine law enforcement is participating in unconstitutional racial profiling.”

According to HuffPost, LePage claimed men with names like “Smoothie, D-Money and Shifty” were coming into his state to deal drugs. He also previously said he keeps a binder with mugshots of all the drug dealers arrested in Maine, and he claimed that 90 % of the people in that binder were black or Hispanic.

This of course shows his officers target the 5% of his citizens that are non-whites, it does not show they deal drugs more frequently than whites. Unfortunately, logic is lost on most racists, and the governor is no exception.

2 Buildings In 48 Hours Engulfed In Flames, Neither Collapse Into Own Footprint –...