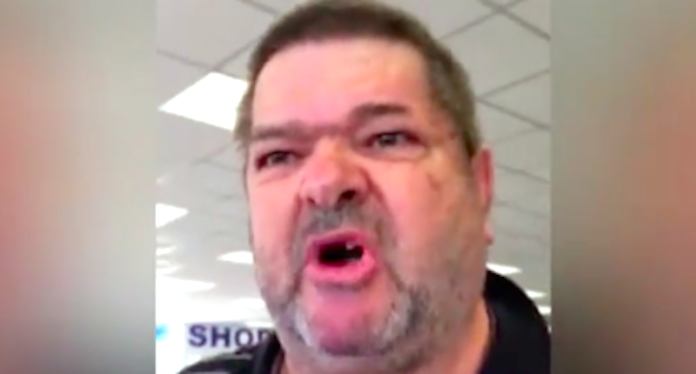 An Oklahoma thrift store shopper went on a ridiculous racist rant against a woman because he overheard her speaking Spanish on the phone.

The Durant woman, Maty Roberts, was speaking to her sister on the phone while shopping at Goodwill when an angry, unilingual, racist white man approached her and began hurling racial slurs, reported KXII-TV.

The boyfriend, Dakota Hodge, and daughter, Alison Roberts, had a confrontation with the man before the recording:

He asked Hodge if he was with Roberts’ family.

“He just kind of came up to me,” said Hodge. “Not even really talking to me, just saying out loud all these racial slurs.”

“He just kept spitting out words like you’re an immigrant and you need to go back to your country,” said Maty’s daughter, Alison Roberts.

The video starts with Roberts asking a question of the racist.

“Sir, are you the one who hates wetbacks?” Roberts asked.

The man replied by repeating a racial slur over and over.

Roberts said her daughter left the store after the man approached her, and then the man confronted her at the checkout line.

When Maty Roberts asked for the man’s name, he said “Goofy.” Police arrived after the man left the store, and he spoke with them, repeating his racial slurs.

He eventually told officers his name was Jack but would not give his last name. Of course the officers probably got it from running his license plate.

He then told police he needed to go home because his blood pressure was high, but he did have time to continue taunting the woman.

Deputy Befriends Elderly Woman, Prays With Her, Steals Her Money, Then Tries To Kill...

Oregon Woman Freezes To Death After Being Evicted For $338 In Late Rent Payments...

Man Who Committed ‘Deviant’ Sex Acts With Vegetables Sentenced To Life In Prison –...