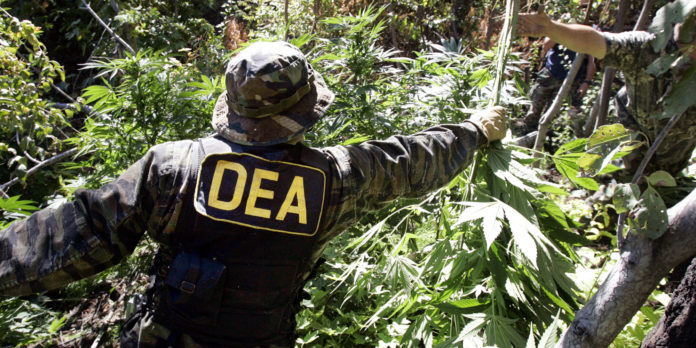 It is likely that states that have legalized medical marijuana will soon get visits from the DEA. Congress stunned the cannabis industry by rejecting the only legal protection preventing Attorney General Jeff  Sessions from going after the 30 states with statewide legal medical marijuana.

This comes at an interesting time, because the feds recently requested information on medical marijuana patients from states. Sessions also talked about wanting to overfill prisons.

In 2014, lawmakers passed an amendment to the federal budget to protect state-legalized medical marijuana industries and their patients.

The amendment — which has to be renewed with every budget — was rejected yesterday by the House Rules Committee. That means the House can’t include the rider in their final version of the federal budget.

If the budget passes without that rider, budtenders, dispensary owners, doctors recommending cannabis and even medical marijuana patients could face prosecution for their involvement in the industry. And not just for what they’re doing right now. They could be charged with offences dating back to when they got involved in the state’s cannabis industry.

Attorney General Sessions might do just that since he’s been itching to crackdown on those states. Since taking office, Sessions has ramped up anti-marijuana rhetoric in America, even saying that marijuana is as bad a heroine.

Last May, he asked Congress to drop the amendment so that he could unleash the DEA on medical marijuana states. His request was denied in July by the Senate Appropriations Committee, but it seems like his message resonated in the House.

The fight for state rights and the marijuana amendment isn’t over yet though. The budget has yet to reach the Senate, where the rider could be re-inserted with support from Senators Cory Booker (D – NJ), Mike Lee (R – UT), Lisa Murkowski (R – AK), Rand Paul (R – KY), Bernie Sanders (D – VT) and others.

But even if it does get reinserted and passed, the amendment only buys patients, doctors and businesses a small window of relief before they have to start looking over their shoulders for DEA helicopters again. The reality is that the industry won’t be safe until Congress listens to the 94 percent of Americans who support medical marijuana and changes the country’s criminally outdated cannabis laws.

State Lowers The Bar For Cops, Police No Longer Required To Graduate From High...

Thousands of Children Exposed to Lead Poisoning to Receive Food Aid But Not Those...