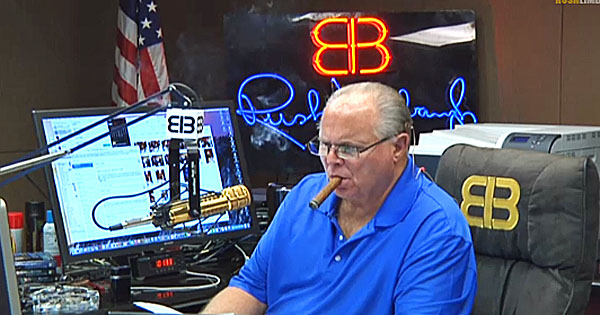 After claiming the media had exaggerated Hurricane Irma simply to boost ratings and promote the science of climate change, Rush Limbaugh will evacuate South Florida to avoid the hurricane.

The ultra conservative broadcaster accused the media of intentionally “creating fear and panic” with hurricane coverage, but he will apparently heed the warnings of scientists and government officials, reported Raw Story.

Refusing to admit he was wrong when accusing the media of blowing Irma out of proportion with crazy things like actual facts, Limbaugh said, “I’m not going to get into details because of the security nature of things, but it turns out that we will not be able to do the program here tomorrow.” Limbaugh continued Thursday on his syndicated radio program, which can be hard below, “We’ll be on the air next week, folks, from parts unknown.”

Limbaugh will not broadcast Friday, because he claimed it would be “legally impossible” to record the show from his home studio, but will return from another location Monday — one day after the storm is expected to hit Florida.

Man Who Assaulted Woman for Wearing Niqab Veil Sentenced to 15-months in Prison –...