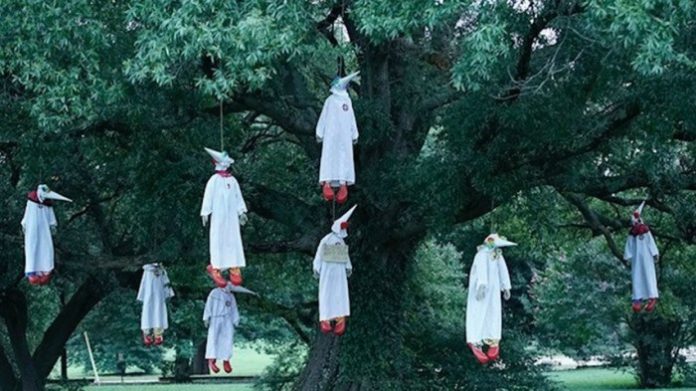 Virginia Police temporarily closed Joseph Bryan Park in Richmond Thursday morning after eight figures dressed as clowns in Klan robes were found hung by the neck from a tree. An an anonymous group calling it self “Indecline” has claimed responsibility and claims the act was planned since 2016.

An anonymous group calling it self “Indecline” stirred up controversy on Thursday morning after they hung eight figures dressed up as clowns and wearing Ku Klux Klan garb from a tree.

One of the figures had a placard around its neck reading: “’If attacked by a mob of clowns, go for the juggler’ — Indecline.”

The group said that they have been planning the act since the spring of 2016 and that they picked the location in Richmond, Virginia, because it was once the capital of the Confederate States of America.

They also specifically chose to hang the figures overnight on Wednesday at Joseph Bryan Park because it was the location of Gabriel Prosser’s slave rebellion in 1800.

Police are considering it a crime scene but has since reopened the park as of 10:40 Thursday morning.

In light of the recent violent racial clashes across the nation, does this act of protest fan the flames of conflict or does it effectively express the racial disparity that is still prevalent in America? How would you react if you saw this scene in a public park?

Let us know your thoughts on the matter in the comments below.

Father Of Famous Aleppo Boy Just Exposed How The US & White Helmets Lied...

Louisiaina Officer Arrested Officer For ‘Carnal Knowledge’ of a Juvenile