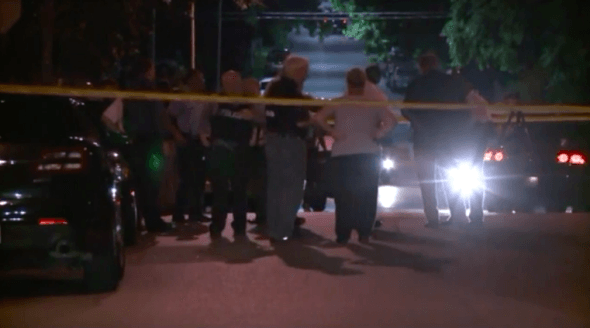 No matter how protected a man feels with a bad it’s clear when that uniform is off you can easily become just another “dangerous black man”, an ordinary target for white supremacist police aggression!

Last Wednesday evening an off-duty St. Louis officer was shot by another white officer after he came to the assistance of them. He was shot in the arm after trying to assist officers with against suspected car thieves.

Interim Police Chief Lawrence O’Toole said the events started with a stolen vehicle from Maryland Heights that was picked-up by one of police cameras in downtown St. Louis around 10 pm. Officers started following the vehicle and used spike strips to disable the car near West Florissant Avenue. The occupants in the car started firing at the officers who backed off.

When the vehicle stopped a short time later, 3 suspects in the car fired again at the officers. In the exchange of gun fire one suspect was shot in the ankle, and one was captured fleeing the scene. A third suspect is still at-large.

Chief O’Toole lived in the area and came to assistance armed with a weapon. Earlier stories alleged he was involved in the shoot out (which didn’t add up) but I have been reading reports saying that after initially being told to lay on the ground, being identified as a police officer and then standing, another officer came onto the scene, declined to try and ID the officer and fired off a round!

Now the lawyer of the 38-year-old wounded officer has said the case shows there is ‘this perception that a black man is automatically feared’.

Rufus J. Tate Jr., speaking to Fox 2, added: ‘This is the first time that we are aware that a black professional in law enforcement [has] himself [been] shot and treated as an ordinary black guy on the street. This is a real problem.’

It will be interesting to see how this unfolds!