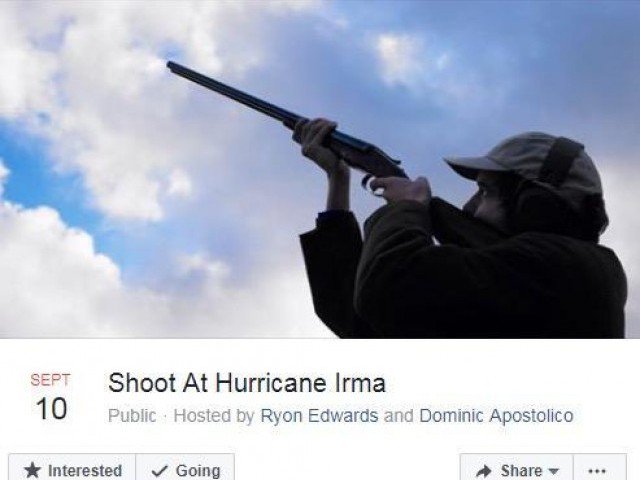 A group of 46,000 Floridians has alarmed Pasco County Sherrif with their novel “idea” on how to change Hurricane Irma’s path. The thousands of individuals have all “RSVP’d” to shoot weapons at the storm in attempts to change Irma’s course of destruction.

The Pasco County Sheriff is asking Floridians not to shoot at Hurricane Irma because it will not impact its damage path.

During a tweet Saturday evening, the sheriff explained “To clarify, DO NOT shoot weapons @ #Irma. You won’t make it turn around & it will have very dangerous side effects.”

The tweet linked to a story explaining that 22-year-old Ryon Edwards was bored and started a Facebook event encouraging Floridians to fire their weapons at the hurricane to get it to turn around. Thus far, 46,000 people have RSVP’d to the event.

To clarify, DO NOT shoot weapons @ #Irma. You won’t make it turn around & it will have very dangerous side effectshttps://t.co/CV4Y9OJknv

“A combination of stress and boredom made me start the event,” he told the BBC in an interview. It was a fake event that many say was taken out of context.

While it is hard to determine how many of the 46,000 have taken Edwards’ tongue-and-cheek suggestion seriously, it goes without says that gunfire and explosions during an already precarious situation such as a hurricane will only increase injuries and harm.

What are your thoughts on the matter? Let us know in the comments below.

Cops Handcuff Dead Body of 15-year They Just Killed, Display his Body in the...

Monsanto Is Scrambling To Bury This Breaking Story – Don’t Let This Go Unshared!...

Ticking Carbon Clock Warns We Have One Year to Avert Climate Catastrophe – Anti...

Police Under Fire for Dismissing an Indigenous Woman Calling for Help Naked on the...