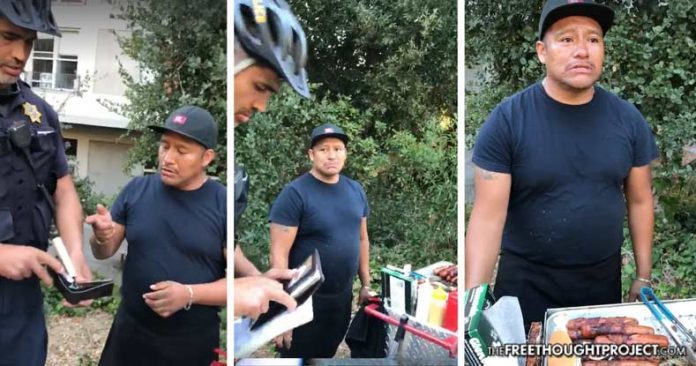 The University of California Berkeley Police were recently featured in a video that shows their officers serving local citizens by protecting them from the dangers of—a hot dog vendor without a permit.

The video was posted on Facebook by Martin Flores, with the caption, “The sadness to observe UC Berkeley Police give a hotdog vendor a ticket and his hard earned money taken away #Justice4Juan.”

“That’s not right man, that’s not right,” Flores said as he used his phone to record a UC Berkeley police officer issuing a ticket to a hot dog vender outside of a football game at the California Memorial Stadium.

“That’s how it works,” the male officer responded. “Take it to a judge, and the judge can decide whether or not it’s right.”

The officer then took the money out of the vendor’s wallet, and when he began to protest in Spanish, the officer told him to “Back up.”

“People can drink on campus at football games with no tickets, but a hard-working man selling hot dogs, earning a living, gets his money taken away and a ticket,” Flores remarked.

“He doesn’t have a permit,” the officer replied as he rifled through the vendor’s wallet. “Yep. This is law and order in action.”

In response the claim from Flores that officers were targeting a hot dog vendor, while there were other people around who were breaking the law that they were ignoring, they insisted that Flores should have called them, and that they would look into his claims “later.”

As others on the scene watched the officer extort Juan the hot dog vendor, one man began to chime in with comments such as, “You must have voted for Trump,” “Good cop, way to go, good job,” and “Nice work dude, you protected the public.”

Flores, who graduated from UC Berkeley in 1996, said he was “disappointed” as an alumnus, to see the campus in its current state. The officer quickly replied, “Well, I’m disappointed in you … I don’t believe you’re using critical thinking right now.”

In response to the injustice, Flores has started a GoFundMe page to raise money for Juan. The page’s description states:

“This is the official go fund me account for Justice4Juan the hotdog vendor at UC Berkeley. The funds raised will be utilized to cover legal and personal loses. In addition, funds in excess are to cover other vendors who have been robbed of their hard earned living through citations and removal of their carts. It is my goal to locate Juan in Berkeley. Any and all help to support and locate him is welcome. On Saturday, September 9, 2017 I took my children to enjoy a Cal Berkeley football game. We had a great time. After the game I promised them that I would support the hotdog vendors by buying food from them. I captured this video as we were interrupted by UC Berkeley Police officer. Thank you for your compassion to support this effort.”