Home News White Supremacist Who Called a Man a ‘Slave’ and ‘Livestock’ Outside Starbucks... 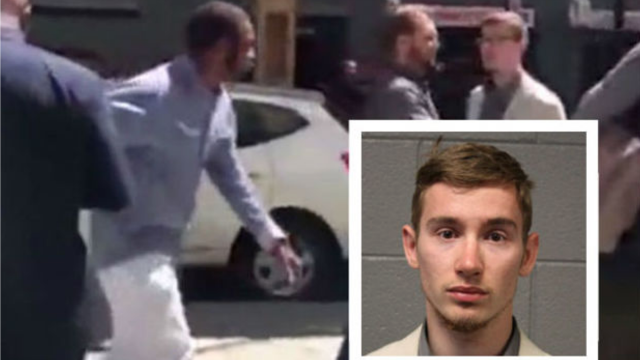 William Boucher, the Chicago man caught on camera going off on a racist tirade outside a Starbucks back in June is now facing hate crime charges after his original charge of misdemeanor battery in a public place was upgraded.

The 23-year-old was caught on video calling a black man “slave” and “vermin” then commanding the man to walk on all fours like “livestock” after coffee was spilled in him. Being the coward he is, Boucher is facing upgraded charges for evading his August court dates. Should he be found and arrested, he could be held without bail.

He was originally charged with misdemeanor battery after his racist tirade. He is accused of hitting, spitting on and verbally attacking two people after coffee was spilled on him.

Prosecutors have upgraded those charges to felony hate crime and felony aggravated battery in a public place.

A photojournalist with ABC captured the video of the attack. In it Boucher calls people “disposable vermin” and “slave” before he starts hitting people.

“Shut up slave! Do not talk to me!” he said to an African-American man. He went on to call the man who spilled the coffee on him “livestock.”

“Get on all fours! Do not walk on those two legs! You don’t deserve to walk on two legs, vermin,” Boucher said.

He was arrested at the scene when several witnesses held him until police arrived. During the arrest he spit on one of the officers.

Boucher was so “proud” and “superior” outwardly, but ran like a coward was when made to face the real world consequences of his actions.

What are your thoughts on the matter? Do you think that the upgrading of Boucher charges were warranted? What should happen to him should be be found after having evaded his court dates? Let us know in the comments below.