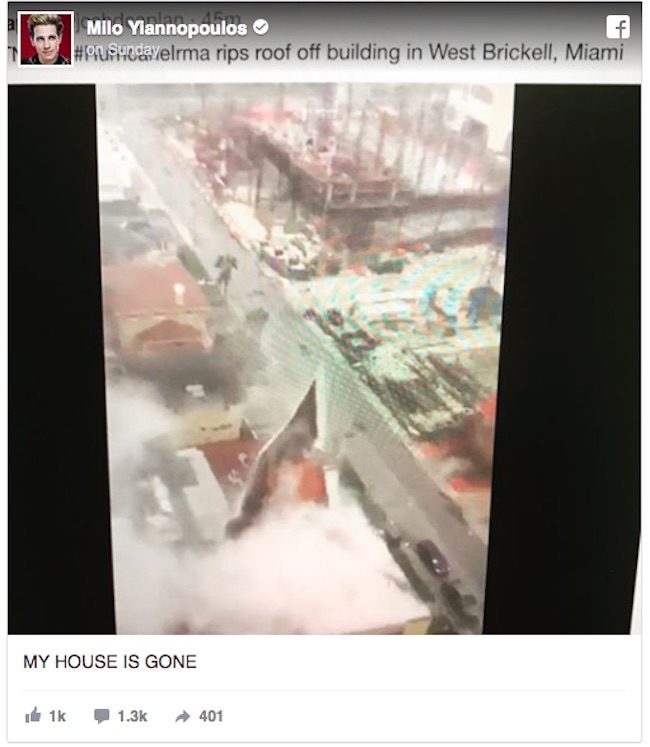 In an ironic turn of events, controversial right wing figure Milo Yiannopoulos who turned the devastating events surrounding hurricane Irma into a joke has lost his home to the category 5 storm.

As reported by Pink News:

Last week Yiannopoulos appeared to joke about the devestation caused by the storm.

He wrote on Facebook: “In more positive Irma news, Richard Branson’s Necker Island has been devastated.”

As the storm headed towards Haiti, he added: “Irma is about to finish what Hillary started: leaving Haiti in ruins.”

While taking pleasure in other people’s loss and pain, Yiannopoulos was blissfully unaware of what was about to happen to his own Florida home.

Then on Sunday he posted a photo on Facebook of the roof having been ripped from a building in West Bricknell.

It was captioned: “MY HOUSE IS GONE”.

It doesn’t feel so good to feel the devastation of a natural disaster, now does it Milo? Perhaps now the infamous internet troll will realize that hurricanes do not discriminate- unlike himself.

What are your thoughts on this ironic (and slightly amusing) twist of fate? Join the discussion in the comments below.