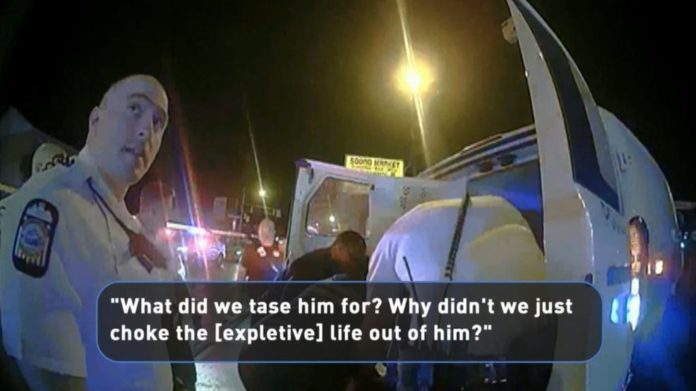 A Columbus, Ohio police officer was suspended after being caught on camera questioning why they used non lethal force to subdue a suspect rather than just murdering him.

Columbus Police Chief Kim Jacobs said Wednesday that a series of officer body cam videos that captured the arrest of Timothy Davis has prompted the suspension of one officer, reported ABC6.

“Upon reviewing some of the video, one of the officers has been relieved of his duty and had his weapon and his badge taken away until we determine if that’s the language he uses on the streets,” Jacobs said on a video statement posted on the Columbus Division of Police Facebook Page.

Davis’ family and friends say there was police brutality and excessive force during Davis’ arrest for outstanding warrants at the Livingston Market on September 1, reported Fox28.

“His head, his face, his ribs, he’s like almost broken,” said Johnson, “I want justice,” said his mother, Valerie Johnson.

Police claim Davis resisted arrested and fought officers, even trying to bite them, as they attempted to subdue him.

Of course, even if he did fight and bite, these are not reasons for an officer to suggest murdering him.

Chief Jacobs said the video is still under investigation.

Mayor Andrew Ginther said, “I applaud the the chief’s action to take away this officer’s weapon and badge.”

As expected from the Fraternal Order of Police President Jason Pappas, he sees no problem with police officers suggesting murdering an unarmed suspect.

“I have zero problems with the arrest, I believe it to be within policy, and to be justified” Pappas said.