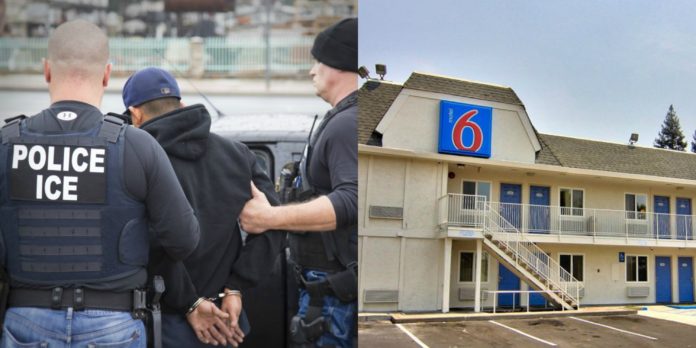 Several Motel 6 locations in Arizona have been assisting Immigration and Customs Enforcement (ICE) by sending their guests lists to the agency. As a result of their cooperation, ICE has already made 20 arrests.

Per the Phoenix New Times, at least two locations of the motel chain have been sending guests lists to ICE “every morning” and reportedly collect $200 per undocumented immigrant arrested.

“We send a report every morning to ICE — all the names of everybody that comes in,” a front-desk clerk said. “Every morning at about 5 o’clock, we do the audit and we push a button and it sends it to ICE.”

Motel 6 is owned by Stephen Schwarzman, a longtime friend of President Trump, and his private equity fund, Blackstone. It should come as no surprise, then, that an ally of the current administration is not only cooperating with but also potentially profiting off of ICE.

While Trump and his billionaire cronies continue to show a blatant disregard for basic human decency, at least Americans will know just what kind of a company Motel 6 is. It seems that “leaving the lights on” isn’t the only thing that this dismal company is willing to do.

Russia and Iran Say They Will “Respond with Force” If Red Lines Crossed Again...

Republican Congressman Promises That God Will Fix Climate Change For Us – Anti Media...