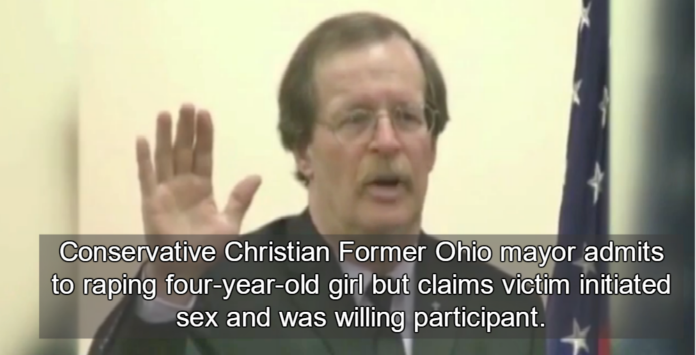 A Former Ohio mayor who dedicated his life to Christ admits he raped a four-year-old girl but claims his victim initiated sexual contact and was a willing participant.

Richard Keenan, who served as mayor of Hubbard, Ohio, in 2010 and 2011, was indicted last month on eight counts of rape and 12 counts of attempted rape and gross sexual imposition.

Keenan, who has described himself in the past as a “dedicated” Christian, is facing multiple counts of rape and attempted rape of a child after confessing to the sex abuse to his wife, a pastor, a social worker and his brother- and sister-in-law.

Prosecutors say Keenan admitted to sexually assaulting the girl over a three-year period, beginning when she was 4 years old.

Keenan blamed the victim for being a “willing participant,” according to court documents.

According to court documents, Keenan first admitted to a local pastor that he molested the girl, who was 4 at the time.

He (Keenan) said the girl walked in on him in the bathroom and “asked him if she could touch his pee-pee.” Keenan said he kissed, fondled and performed oral sex on the girl, and let her kiss his genitals, court docs say.

Keenan called his brother and sister-in-law to confess the crime and said he “had gone way, way too far and way over the line,” the docs say. When his wife confronted him about it, he told her, “I did it.”

Raw Story reports Keenan told a social worker that he had molested the girl for at least two years, beginning in September 2013, but he blamed the child for initiating the sex acts and described her as a “willing participant.”

When he was sworn into office in 2010 the former mayor of Hubbard, Ohio, bragged about his Christian values, declaring:

I’m a Christian. Dedicating my life to Jesus has changed my life.

Don’t preach it, but live it.

Keenan faces life in prison if convicted. He is now free on $75,000 bail. Jesus could not be reached for comment.

Students Post Video of Themselves Throwing Drinks and Heckling Black Men For Taking a...

Hemp Is Set to Overtake the Production of Tobacco in Kentucky – Anti Media...

Rape And Incest Are The ‘Will Of God’ – Anti Media News