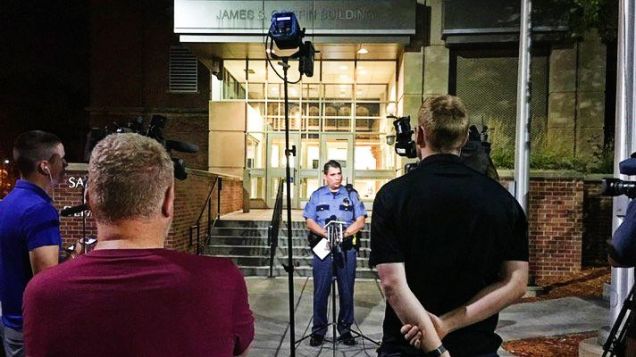 Brent P. Ahlers, a campus security officer at a Minnesota college was shot in the shoulder Tuesday night and accused a black perpetrator for shooting him. St Paul police were suspicious of Ahlers’ claim and he soon admitted that he lied about the incident to cover up the fact he brought a prohibited firearm on campus and that in actuality he had shot himself. What’s most problematic is that this man- seemingly to make his story more believable, chose to describe his “attacker” as black, and would have been content if some innocent black man were to take the fall for his own offense.

The Star Tribune reports that St. Paul police were immediately skeptical of 25-year-old Brent P. Ahlers’ story that he had been shot by a black gunman in a navy blue sweatshirt with a short Afro, so they did not publicly share the description of the supposed shooter. The campus of St. Catherine University, however, was still put on lockdown for hours as 55 police officers, four K-9 units and Minnesota State Patrol aircraft searched for the alleged suspect.

Ahlers, who is white, told police Wednesday that he made up the story because he was afraid of losing his job at the Catholic university for women, where firearms are not permitted and not issued to security personnel.

He was arrested Wednesday night and cited for falsely reporting a crime, which is a misdemeanor. After being treated for a shoulder wound, he was booked into the Ramsey County jail and released on his own recognizance at 4:30 a.m., according to the Pioneer Press.

Ahler’s case has been presented to the city attorney’s office to be considered for charges above and beyond the false-report citation.

St. Catherine University President Becky Roloff posted a statement to the school’s website Thursday evening condemning Ahler’s actions and saying that he had been fired by the university:

I want to update the community on two aspects of the issues raised in connection with the St. Catherine University Department of Public Safety officer who falsely reported having been shot on campus Tuesday night.

First, as you know, Brent Ahlers was put on paid leave September 13 while the St. Paul Police conducted their investigation and the University completed a review of the facts. That status has now changed. He is no longer an employee of the University effective today, September 14.

Second, I want to be clear that St. Catherine University strongly condemns racial discrimination, racial stereotyping, and racial profiling of any kind. The statements attributed to the former employee concerning the race of an alleged suspect are deeply troubling and do not reflect our values.

Meanwhile, black leaders spoke out Thursday morning after news broke that Ahlers had confessed to making up the whole thing.

Dianne Binns, president of the St. Paul NAACP, told the Star Tribune that Ahler’s decision to describe the nonexistent suspect as a black man is rooted in the racism that perpetuated slavery and the oppression of blacks for hundreds of years.

“That’s what black people live with,” Binns said. “We’ve been lynched, and we’ve been put in jail to find out later you haven’t done it. That’s the sad thing about it. It hasn’t stopped.”

“It’s a sickening thing,” Tyrone Terrill, president of the St. Paul African-American Leadership Council, told the Tribune. “He put not only black youth at risk; he put St. Paul police and other law enforcement at risk with his lie.”

St. Catherine’s University did the right thing by relieving Ahlers of his duty’s at the University, but the real justice will come when he is convicted of his charges for falsely reporting a crime. Ahlers could have placed an innocent black man behind bars, and given today’s climate of racial tension between law enforcement and people of color, he could have gotten someone killed.

Doctors Gave Boy 3 Days to Live, Then His Mom Secretly Gave Him Cannabis...

If You Use Facebook Messenger, This Is How You Are Being Recorded Even When...