A sixth-grade student in Michigan says he does not want to go back to school after he was assaulted by his homeroom teacher for choosing not to stand for the Pledge of Allegiance.

Stone Chaney, who attends East Middle School in Farmington Hills, Michigan, said his teacher “violently” dragged him out of his chair and attempted to force him to stand for the pledge, leaving the young man confused and unwilling to return to that school, reported ClickOnDetroit.

Stone, who is very adamant about not standing because he does not pledge to a flag, said that the day after the initial incident, another teacher yelled at him for remaining seated during the pledge.

“I don’t stand because I don’t pledge to a flag,” the child explained. “I pledge to God and family.”

Stone’s parents are still looking for answers as to how the September 7 incident occurred.

His father addressed the district directly at its last board meeting, defending his son’s right to do what he wishes when the pledge is being spoken.

Even though he was yelled at and physically ripped from his chair, the superintendent of Farmington Public Schools released a statement detailing that the district does support the right of students to opt out of the pledge, announcing that it was conducting an investigation and that the teacher involved has been placed on administrative leave pending the outcome.

Stone and his family are looking into other options and will probably leave the district. 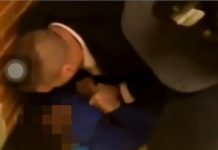 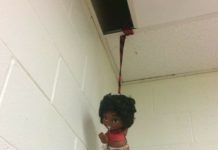