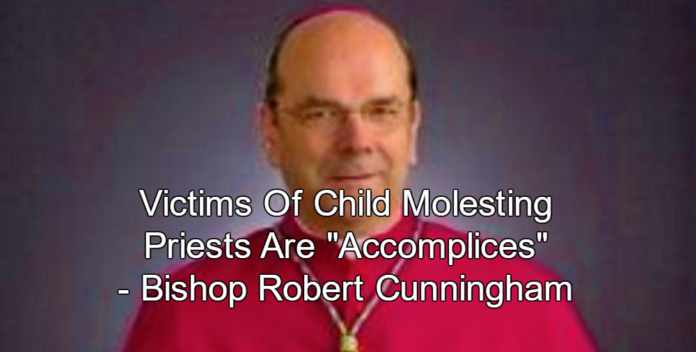 A Catholic Bishop based in New York is in hot water after testifying that the victims of child molesting priests are partly to blame for being raped and sexually assaulted.

Calls for Bishop Robert Cunningham to step down are growing louder after it was revealed the bishop testified in a sworn deposition that in the eyes of the church a child molested by a priest has committed a sin, claiming about one such victim:

The boy is culpable.

In the deposition, Cunningham not only said,”the boy (the victim) is culpable,” he also referred to victims as “accomplices.”

Bishop Cunningham made his odious claims in a 2011 deposition responding to a federal lawsuit filed by a man who said a priest in the Syracuse diocese sexually abused him as a child.

However, the despicable claims were only made public earlier this month.

In response to the negative publicity, and the loud calls for his resignation, Bishop Cunningham is attempting to distance himself from his horrific remarks.

In a letter issued earlier this week, Bishop Cunningham tried to reassure his “brothers and sisters in Christ” that he is not the moral monster he appears to be. Cunningham writes:

Victims of abuse are never at fault!

Bishop Cunningham goes on to offer some rather tepid and unconvincing excuses for why he gave sworn testimony that child victims are to blame for being sexually assaulted by priests, and why such victims should be considered as “accomplices” in the rape and sexual abuse they suffered at the hands of Catholic clergy.

Commenting on the story, David Clohessy, director of the Survivors Network of those Abused by Priests said:

Blaming a victim of childhood sexual violence for his or her trauma is among the most inhumane things I can imagine a person saying, especially a well-educated man like a bishop.

It’s important to remember that a deposition remarks are the opposite of off-handed remarks. Cunningham chose his words carefully. That makes his callousness even more alarming.

At this point in time, nothing that members of the Catholic clergy say or do should come as a surprise. The litany of horrors committed, enabled, and excused by Catholic clergy members would fill volumes.

And, as always, it is the children that suffer.

Trump Just Promised $350 Billion To A Country That’s Beheading A Blind Man For...