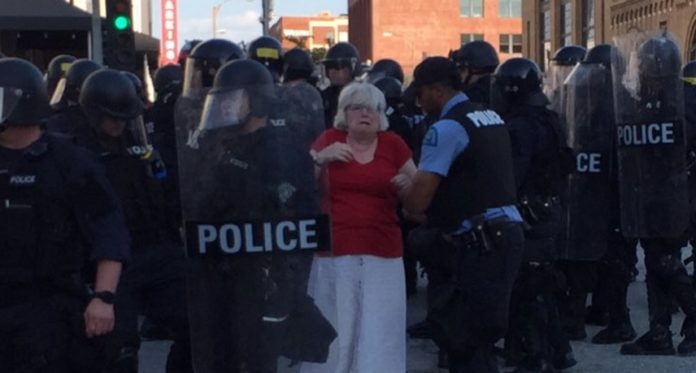 Earlier this week, Officer Jason Stockley of the St. Louis Police was acquitted of the murder of a black man, Anthony Lamar Smith, who he mercilessly gunned down without trial or charge after a car chase.

This frustratingly unsurprising miscarriage of justice is particularly galling because Officer Stockley was caught planting a gun in the car of Smith following the murder, after being recorded telling his partner “we’re killing this motherf*cker, don’t you know.”

The people of St. Louis have risen up in protest against the brutality of their police department, which responded with more brutality against innocent and peaceful protestors.

In this video, you can see armored police officers knock an elderly woman to the ground and step over her as they proceed to mace those all around her.

Watch the lady wearing red in the bottom right of the screen. Police using pepper spray on protesters marching after the Stockley ruling pic.twitter.com/XF16yxDQqg

The police have now announced this little old lady was arrested and charged with “interference.”

“The woman shown in the video refused to leave the street and area as officers were attempting to move them back,” [police spokesman] Jackson Schron said in an email.

Police said on Saturday afternoon that the woman was charged with “interfering.”

You read that right.

St Louis police arrested this elderly woman whose only crime was that she wasn't able to move fast enough when the riot cops came running. pic.twitter.com/eq1m2cXbQ2

These incidents show that the not only can the police murder American citizens with impunity, there is nobody who is safe from violence if they dare to protest their actions.

Time and time again our legal system shows that the rule of law doesn’t extend to those who enforce it.

The reason for the militarization of our police forces should be clear to everybody. The distribution of heavy weaponry, tanks, and armor to the police is not for the safety of the public but to defend the wealthy elites against the anger of the people; to stamp down protests and to be the enforcers of white supremacy.

Now that President Trump is rolling back President Obama’s police reform efforts, we can expect to see more unnecessary brutality and violence in the coming years. We are well on our way to becoming a full-blown police state.

Protecting and serving the hell out of you.