Home News Mich. Teacher ‘Violently’ Drags Black 6th-Grader Out of His Seat After He... 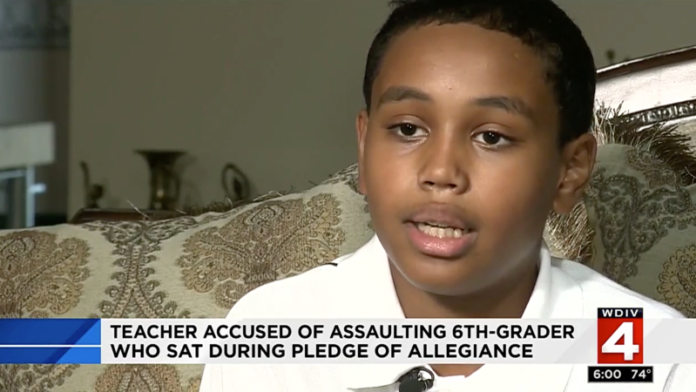 Everybody is all about freedom of speech and expression until a black person (hey, Colin Kaepernick; hey, Jemele Hill) decides to exercise his or her right to do so. And in this particular case, a black sixth-grader out of Michigan says he was assaulted by his homeroom teacher all because he was exercising his rights and declined to stand for the Pledge of Allegiance.

Stone Chaney, who attends East Middle School in Farmington Hills, Mich., told ClickOnDetroit that his teacher “violently” dragged him out of his chair and attempted to force him to stand for the pledge, leaving the young man confused and unwilling to return to that school.

Note that Stone referred to the individual in question as the “teacher consultant.” That means that the person who allegedly thought it was all right to snatch a child out of his seat trains other teachers. One would wonder what kind of training those other teachers are receiving.

Except I can tell you exactly what, because Stone claims that the very next day after the initial incident, another teacher yelled at him for remaining seated during the pledge.

Stone is very adamant about not standing, saying that he does not pledge to a flag.

“I don’t stand because I don’t pledge to a flag,” the precocious child explained. “I pledge to God and family.”

Stone’s parents are still looking for answers as to how the incident, which occurred Sept. 7., could have unfolded the way it did. His father addressed the district directly at its last board meeting, defending his son’s right to do what he wishes when the pledge is being spoken.

The superintendent of Farmington Public Schools released a statement detailing that the district does support the right of students to opt out of the pledge, announcing that it was conducting an investigation and that the teacher involved has been placed on administrative leave pending the outcome.

In the meantime, Stone and his family are looking into other options and will probably end up leaving the district, the news station notes.

Kaepernick Just Ran First (Of Many) “I Know My Rights” Camp For Hundreds Of...