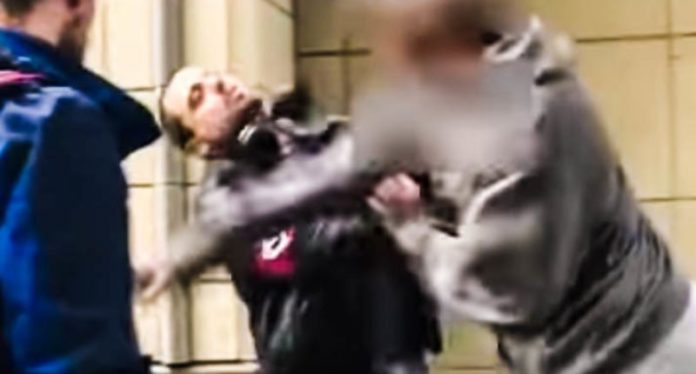 A wannabe tough guy Neo-Nazi in Seattle got knocked out in just 1 punch after he harassed a black passenger on a bus.

The unidentified Nazi was first spotted riding on a bus, where witnesses say he was harassing a black passenger. From there, anti-fascist activists used social media to track the man’s whereabouts, and he was eventually spotted on a street corner in the downtown area, reported BuzzFeed.

He ended up in a confrontation with unidentified people who objected to him walking around wearing a Nazi arm band.

One man was eventually tired of hearing the neo-Nazi, so he punched him in the jaw, knocking him out as his companions applaud.

In an interview with BuzzFeed, one of the anonymous social media users who helped track the Seattle Nazi applauded the unidentified man who knocked the Nazi to the ground.

“I would say that we successfully identified, tracked and coordinated to neutralize a clear and present danger to Seattle,” the person said. “Whether we coordinated the actual punch or not… I, for one, applaud the anonymous hero.”

Buffalo Cop Arrested For Assaulting ANOTHER Person In Custody

“I’m a Defeated Man. I Wanted to Illuminate the Whole Earth.” – Anti Media...

‘We Work 14 Hours A Day With No Break,’ Woman Finds Note From Chinese...