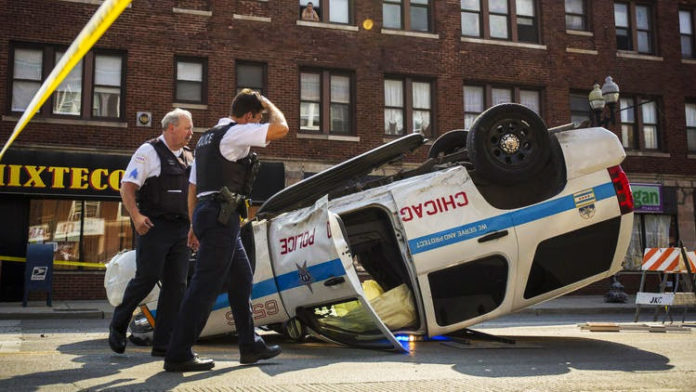 Attorneys in Chicago are again calling for cases to be thrown out due to massive police corruption after 2 people arrested by a crooked Chicago tactical team recently had their convictions reversed.

William Carter, 31, and Bruce Powell, 50, both alleged they had been framed by Sgt. Ronald Watts and his team who worked in the Ida B. Wells housing project on the South Side. The Watts team was accused by residents, and two undercover Chicago police officers, of shaking down and framing drug dealers for years. Watts and one of his officers were charged and convicted in Federal court. But the majority of his team remain on the force to this day, reported NBC Chicago.

Five people with 8 convictions have been reversed. But there are plenty more waiting to be heard.

“I believe every case that implicates these officers needs to be thrown out,” says defense attorney Joshua Tepfer. “We need a clean slate.”

Tepfer has already seen three clients exonerated. But the state is fighting efforts to free Anthony McDaniels, another of his clients.

Ironically, Tepfer says, McDaniels was arrested by the very same officers who were on Powell’s arrest report, and the state agreed that arrest was tainted.

“These same group of officers, under Sgt. Watts, many of whom are still making arrests and testifying in court, were corrupt,” Tepfer exclaimed. “They framed individuals, they perjured themselves, they falsified police reports. Eight convictions have been vacated. Yet we know there are probably hundreds of arrests that they made, hundreds of convictions!”

Tepfer and other attorneys say the officers’ collective work was so tainted, none of their arrests should be considered valid. And their call to wipe out all their cases is completely legitimate.

“You can’t in good conscience maintain a conviction where there is that level of doubt about the honesty of the police officers involved,” says Philadelphia public defender Bradley Bridge. “It’s in everyone’s interest, the prosecutors, the defense attorneys, the judiciary, to get to the bottom of his in as rapid a fashion as possible.”

According to NBC, Philadelphia faced a similar issue when 6 officers, accused by another officer of stealing drugs and planting drugs on individuals, then testifying against them in court. The accusations were so troubling, that nearly a thousand convictions were vacated, and they are still analyzing more.

Sadly, with the Philadelphia cases, the officers were acquitted even though there was sufficient evidence to throw out so many convictions.

There was enough evidence based on the charges against the officers to render infirm any of the convictions in which they were involved,” Bridge said. “That the officers were found not guilty was a mere footnote in analyzing what the situation is.”

Devil’s Punchbowl — U.S. Concentration Camp For African Americans So Horrific It Was Erased...