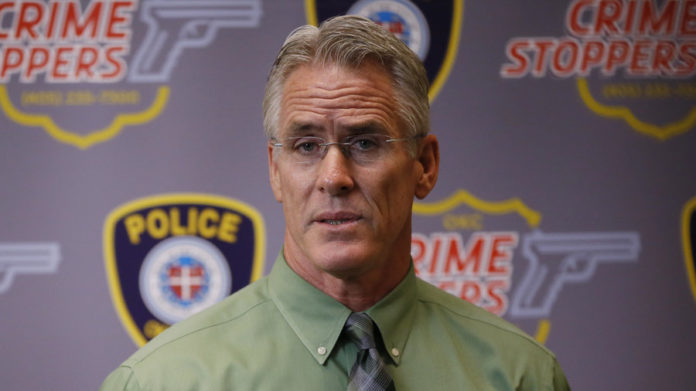 Oklahoma City police officers shot and killed a deaf man in front of his home even though witnesses were yelling to the cops that the man was deaf.

Magdiel Sanchez, 35, was tased and shot to death on Tuesday night, police Capt. Bo Mathews said at a news conference. He admitted witnesses were yelling “he can’t hear you” before the officers fired, but the officers reportedly didn’t hear the yells, according to ABC News. The officers reported that Sanchez had a stick in his hand, but Mathews described it as a metal pipe.

The officers were so overcome with fear, that they got locked in their tunnel vision. Mathews explains why he believes they were unable to hear:

“In those situations, very volatile situations, you have a weapon out, you can get what they call tunnel vision, or you can really lock in to just the person that has the weapon that’d be the threat against you,” Mathews said. “I don’t know exactly what the officers were thinking at that point.”

Sanchez, who had no criminal history, died at the scene. The officer who fired the gun, Sgt. Chris Barnes, has been placed on administrative leave pending an investigation.

ABC reported on the details of the crime:

Mathews said the officers were investigating a reported hit-and-run at around 8:15 p.m. Tuesday. He said a witness told Lt. Matthew Lindsey the address where the vehicle responsible for the hit-and-run had gone, and that Sanchez was on the porch when Lindsey arrived.

Mathews fails to mention that Sanchez reportedly always carried his pipe because of all numerous stray dogs in the area.

He said Sanchez was holding a metal pipe that was approximately two feet (0.6 meters) long and that had a leather loop on one end for wrapping around one’s wrist. Lindsey called for backup and Barnes arrived, at which point Sanchez left the porch and began to approach the officers, Mathews said.

He said he didn’t know how many shots were fired, but that it was more than one.

Mathews had no answer as to why Barnes used his gun instead of a taser for the man that was much too far away to attack anyone with a metal pipe. Of course, neither officer had a body camera.

Sanchez’s father, who was driving the hit-and-run vehicle, confirmed after the shooting that his son was deaf, Mathews said.

Sanchez was not in the vehicle when his father struck an object and drove off.

Neighbor Julio Rayos told The Oklahoman that in addition to being deaf, Sanchez was developmentally disabled and didn’t speak, communicating mainly through hand movements. Rayos said he believes Sanchez became frustrated trying to tell the officers what was going on.

“The guy does movements,” Rayos told the newspaper. “He don’t speak, he don’t hear, mainly it is hand movements. That’s how he communicates. I believe he was frustrated trying to tell them what was going on.”

Neighbor Jolie Guebara said she heard 5 or 6 gunshots before she looked outside and saw the police. “He always had a stick that he would walk around with, because there’s a lot of stray dogs,” Guebara said.

Guebara said Sanchez, whose name she didn’t know, wrote notes to communicate with her and her husband when he would occasionally stop and visit if they were outside.

7yo Autistic Boy Cuffed, Kidnapped By Police, Held For 6 Days – For Acting...