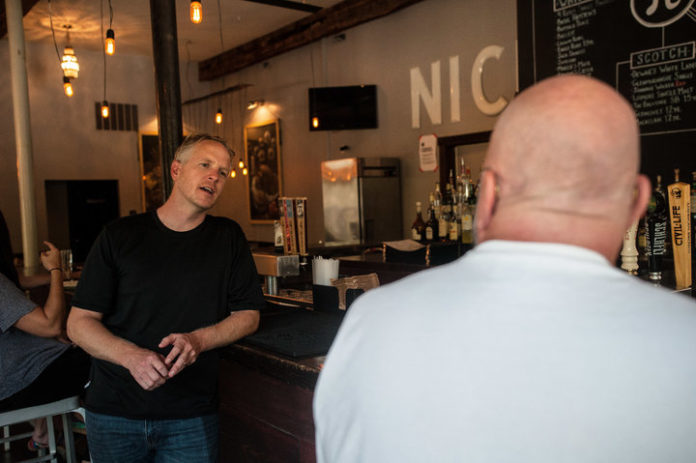 Chris Sommers, the owner of Pi Pizzeria in St. Louis, MO,  prepared to head home after protesters mostly cleared the area of his store. They were protesting a not guilty verdict for an officer that fatally shot an unarmed black man in the back.

On his way out, he saw police officers with gas masks and shields marching down an empty street toward his business, so he ran back to the restaurant. One of the officers began “indiscriminately” shooting off pepper balls for no legitimate reason.

Sommers started filming and got mad at the inappropriate police behavior. So naturally, police threw a tear gas canister at him. He managed to get into his store and close the door before police could further assault him.

“You generally want to be friendly with the police,” Sommers told HuffPost in an interview. “And then they shoot at you.”

Sommers gives police a 50 percent discount and has donated to law enforcement groups. He considered himself a police supporter, even though, he said, St. Louis cops never seemed to solve any of the crimes occasionally committed against his restaurants.

On Twitter, he’d used the term “dimwits” to describe officers who chanted “Whose streets? Our streets” on Sunday night after they arrested peaceful protesters and journalists.

Sommers then laid out his story in a lengthy Facebook post that was republished by Riverfront Times.

And then the harassment by disgusting police brutality supporters began.

HuffPost reported, “On Wednesday, the phones were still ringing almost constantly. One caller used an anti-gay slur. At another location, someone tried to place a fake order totaling more than $600. Callers said “Blue Lives Matter.” Someone apparently spread a rumor among protesters claiming that Pi was handing out free pizza.”

People called him a “libtard” and gave fake bad reviews online, even claiming there were roaches at Pi Pizzeria. That there was bondage equipment inside. That the pizza sucked. People wrote that they hope the windows get smashed, that the business fails. The online reaction, Sommers said, “just goes to the character of these guys that think that cops are infallible.”

Sommers said he did think a lot of the officers were “dimwitted” based on the decisions they made during these latest protests. “Who thought that was a good idea?” he said of their tactics. “Who’s standing up to it? That’s the problem, that this isn’t a few bad eggs. Who’s standing up to this behavior? Are they stressed? Yeah. Are they tired? Yeah. So am I. I’m out here trying to protect my business, protect my team, and they start terrorizing us.”

Sommers has been encouraged by the backing of his customers since the attacks and lies of the police supporters. HuffPost said The Central West End location was more packed than usual for Wednesday lunch, with people stopping by to lend support.

Sommers expects to testify in federal court in connection with legal action bought by the American Civil Liberties Union over the cops’ behavior.

“Did I run my mouth? Yes, certainly, after I got assaulted. Do I regret some things? I regret the impact on my employees and my wife. But I know what I said is true, and there are a lot of dimwitted people in the police department, because this stuff is happening everywhere,” Sommers said. “It’s not a few bad eggs. It’s happening everywhere, and what we need is more good eggs who stand up, for police officers to come out and acknowledge what’s going on.”

In Opposition to DAPL, City of Santa Monica City Decides To Divest From Wells...

NJ Woman Has Racist Rant at Sears Because a Latino Family Was Using Coupons...