Home Activism Texas School Lies to Students- Tells Them That Standing for the Pledge... 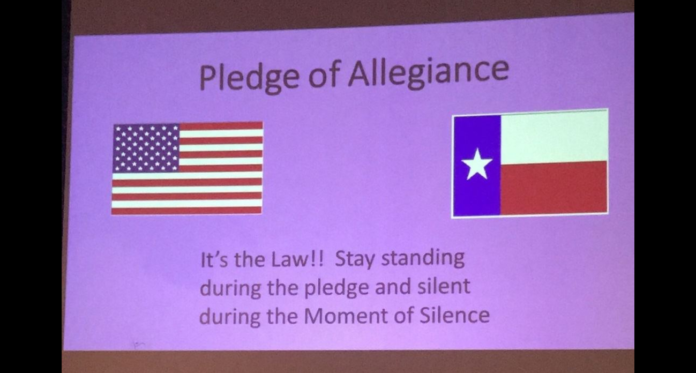 The topic of kneeling for the National Anthem has brought fierce debate from both sides of the table. Many see exempting oneself from standing for the anthem as disrespectful to those who have fought or died for the country’s freedom, while others view it as a political l protest- highlighting that the nation does not live up to tune’s ideals of freedom, liberty, and justice for all.

Recently, however, it was not the National Anthem that made the headlines, it was the pledge of allegiance, and the debate is on questioning whether standing for the pledge is mandatory.

During a presentation on the Pledge of Allegiance at Midland High School in Texas, students were shown a slide telling the students it’s the law to stand during the pledge and stay silent during the moment of silence, which is an outright lie.

So what the hell were they thinking?

What’s unclear from the news stories about this incident is what the assembly was about, how school officials responded to the situation, and whether they made clear to students that standing during the Pledge is optional.

A local CBS affiliated quoted one person (without a title, though she apparently works in the HR department) saying that, “if students wish not to participate, their parents can fill out a form to remove them during the pledge.” But that’s wrong, too. You don’t need your parents’ permission to remain seated.

The same article quotes district officials saying this was all a “misunderstanding in context”… but it’s hard to know how this would make sense in any context. Unless the very next slide said “I’m just kidding!”

The Freedom From Religion Foundation has sent a letter to the District saying, among other things, that kids should not need parental permission to remain seated during the Pledge.

What is the benefit of making students feel like they are breaking the law should they sit out the Pledge of Allegiance? It would seem to me that the administration sure is starting early with suppressing one’s right to peacefully protest by feeding these students lies. To intimidate students into silencing dissenting voices is wrong, and so is the school’s excuse that it was all a “misunderstanding”.

Cut Corporate Taxes? This Is How The Biggest Companies Cheated On Taxes In 2016...