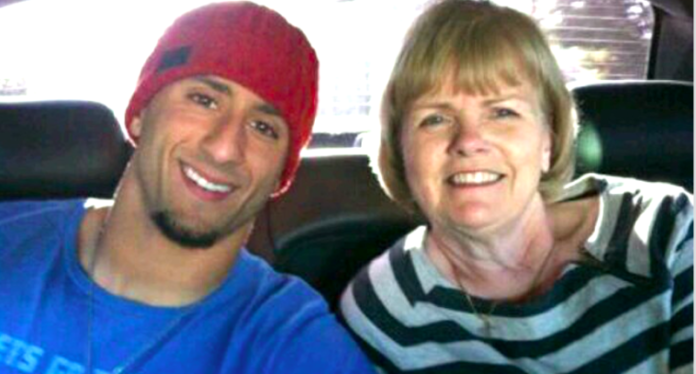 Teresa Kaepernick, mother of Colin Kaepernick, responded to President Trump’s comments Friday night when he said that NFL owners should “get that son-of-a-b*tch off the field” when players protest by taking a knee during the national anthem.

Ms. Kaepernick, who is white and is Colin Kaepernick’s adopted mother had the beautiful reply, “Guess I’m a proud b*tch,”

Guess that makes me a proud bitch!

Deadspin.com’s Lindsey Adler spoke with Teresa Kaepernick “to ask her how it feels to have the president of the United States trashing her son and his right to protest over and over again.”

“It’s disappointing that Trump is the president and talks the way he talks, though,” she said. “It’s just incredibly disappointing. Rick and I had never been real political people, but prior to when all of the campaigning was going on, I mean, it didn’t take more than a minute to realize we didn’t want Donald Trump in the presidency.”

“The guy is not all there,” she went on, “and I can’t tell you how shocked we were when he won, but we have been pretty vocal about it since long before Colin took a knee. So, we have some pretty strong feelings about that part of things. To see this man that you have no respect for, basically because of all that he’s done in this presidency so far, slandering my kid publicly.”

Proposed Law Will Jail Passengers For 4 Months For Riding In A Car Without...