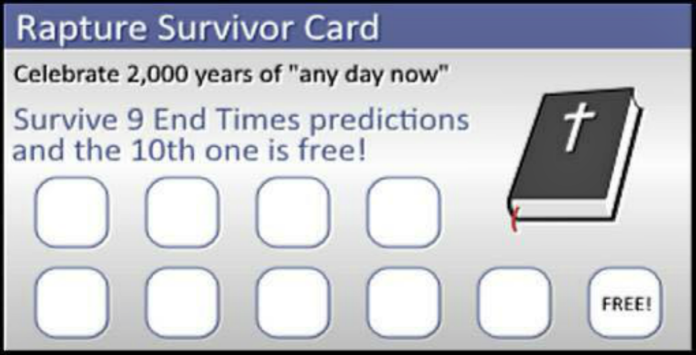 Congratulations! The Rapture has been cancelled. The world was supposed to end on September 23, but we’re still here.

Many Bible believing Christians were making plans to be with Jesus this weekend, but it appears the Rapture was cancelled.

The “Rapture,” as described in the Book of Revelation, is the beginning of the end times, when “worthy Christians” are lifted into heaven by Jesus, and those left behind will be forced to face the end of the world, also known as the apocalypse.

According to Christian numerologist David Meade, verses in Luke 21:25 to 26 are the sign that recent events, such as the recent solar eclipse and Hurricane Harvey, are signs of the apocalypse.

25: There will be signs in the sun, moon and stars. On the earth, nations will be in anguish and perplexity at the roaring and tossing of the sea. People will faint from terror, apprehensive of what is coming on the world, for the heavenly bodies will be shaken.’

’26: Men’s hearts failing them for fear, and for looking after those things which are coming on the earth: for the powers of heaven shall be shaken.’

The Express reports that Meade claimed that the mystical Planet X, also known as Nibiru, will appear in the skies above Earth, as predicted in the Book of Revelation. Meade explains:

The great sign of The Woman as described in revelation 12:1-2 forms and lasts for only a few hours. According to computer generated astronomical models, this sign has never before occurred in human history.

It will occur once on September 23, 2017. It will never occur again. When it occurs, it places the Earth immediately before the time of the Sixth Seal of Revelation.

During this time frame on September 23, 2017, the moon appears under the feet of the Constellation Virgo. The Sun appears to precisely clothe Virgo.

The Biblical prophecy suggests that “the arrival of Nibiru will trigger volcanoes to engulf the world in flames, while violent earthquakes will cause tsunamis to drown the land.”

However, Meade now says he was wrong about the date.

Man Arrested After Being Caught Texting During Flight About Sexually Abusing Kids and Bestiality...