Home News Louisiana Attorney General Jeff Landry: “We Will Get Prayer Back in Schools” 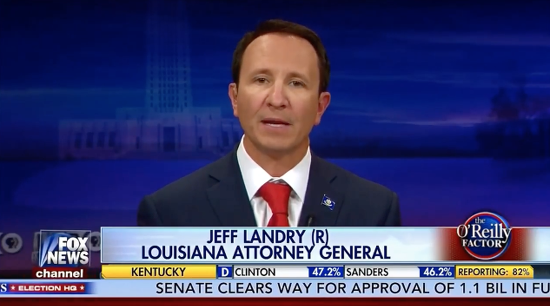 State-sanctioned or mandatory prayer in public schools is not permitted in the United States, and has been prohibited for 55 years. It all started when Steven Engel, a Jewish New Yorker, along with other parents sued New York State over the mandatory Christian prayer that was being recited in schools claiming it violated their First Amendment Rights and was unconstitutional, and on June 25, 1962 the Supreme Court agreed and henceforth school prayer was banned.

Since that day Christians feeling persecuted have fought to regain the right to force their beliefs upon others. While Christians continue to fight for mandatory prayers to be reinstated in schools, should another religious body request the same- surely they would be decrying the request as being unconstitutional (how ironic). If the idea of even learning about another faith produces the type of vitriol that came from a Christian mother refusing her daughter to do a homework assignment on Islam– why do Christians feel that their faith should be forced upon others?

Regardless, apparently Christians still feel that entitlement, and Louisiana’s Attorney General Jeff Landry is making it his mission to bring mandatory (Christian) worship into public schools.

On Thursday night, Louisiana’s Attorney General Jeff Landry spoke to a group of conservative Christians at a private event for the Louisiana Family Forum, a Religious Right group. And he told them it was his goal to bring prayer back to public schools.

As if it ever left.

Louisiana Attorney General Jeff Landry is vowing to fight for prayer in public schools, telling a friendly audience of several hundred people: “With your prayers, and an offense, we will get prayer back in public schools.”

Landry said he was encouraged recently by a court ruling that a Michigan county board may open its meetings with a Christian prayer and invite audience members to join. The 6th U.S. Circuit Court of Appeals in Cincinnati rejected assertions that the prayers violated the Constitution.

“I just want you to know that we are winning, and we will get God back into this country,” Landry said.

Does anyone want to tell the state’s top attorney that he doesn’t understand the law he’s sworn to uphold?

While it is prefectly legal, regardless of faith to pray in school, it is the  in the proselytizing in the classroom which is not. No one’s freedom of religion is being violated as one can pray on their own and so long as it is not forced upon others.

Teachers can pray. Administrators can pray. Students can pray. They can bring their bibles to school, too. What’s not permitted is forced or coercive prayer. These things have been litigated in the past and the legal precedent is very clear.

And while an appeals court recently said that board members of a local government could lead prayers to Jesus at meetings, it was a controversial ruling, it may be appealed to the Supreme Court, and it doesn’t apply to public schools.

Landry later bragged to the group about his efforts to block LGBTQ rights and anti-discrimination measures.

Because that’s what Christianity means these days: Bigotry and oppression in the name of God.

Last year, Landry was in the news for saying being transgender is a mental illness and that “the good Lord doesn’t build us in that particular way.”

He’s not an anomaly. There are plenty of attorneys general and other elected officials who have every intention of putting their religious beliefs into action. It would be unpatriotic and heretical if anyone else ever tried to do that — imagine the reaction if a Muslim tried it — but when Christians do it, they expect to be treated like saviors. It’s disgusting. It’s cruel. And it’s perfectly in line with the kinds of Christians who put Donald Trump and his evangelical friends in positions of power.

What are your sentiments on mandatory prayer in public schools? Do you think that the Religious Right truly feels like their rights are being violated, or it is just a thinly veiled attempt to convert the masses to Christianity by subversive means? Share your thoughts in the comment section below.

Alien Particles From Another Solar System Are Responsible For Computer Crashes, Researcher Says –...