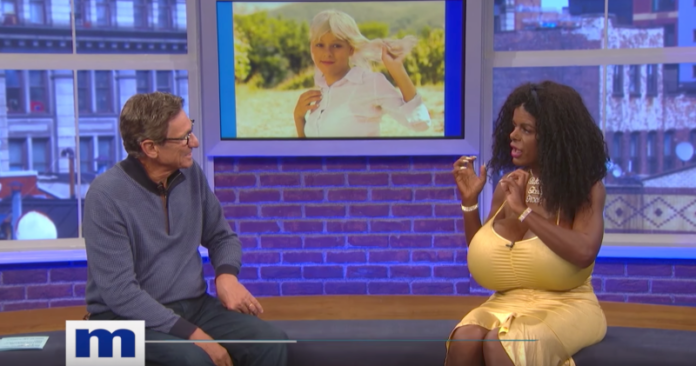 Martina Big started out as a white woman, and now she’s here … with Maury Povich, explaining why she chose to drastically change her appearance. The plastic-surgery-obsessed Big appeared on Maury, wearing a gigantic “Black Girls Rock” necklace and her best kinky weave. Even as the audience sat dumbfounded and confused, you could tell Maury was thinking, “I should have just done my usual paternity-testing show.”

“Martina, do you think you’re a black person?” Maury asked.

Big’s “transitioning” into a black woman included her taking supplements to darken her skin, lip implants, a nose job, various lipo procedures and a kinky weave. The breast enhancements were done previously during her foray into “these damn plastic surgeons should know better” breast-enlargement surgeries and the fact that she wanted to look like Pamela Anderson.

“Everyone who’s watching this who’s a person of color is going to say it’s not just skin-deep. You think you want to learn about the black culture, and you can absorb all of that,” Maury said.

“Yeah,” Big replied. She then went on to state that hopefully she won’t need extensions in her hair once her blond hair starts to grow in darker “naturally.”

“Being black is not about extensions,” Maury stated.

When Maury Povich is a voice of reason, you need to check your life decisions. What would have made the segment television gold would have been Maury ending it with, “You are not a black woman!”

But, of course, as with every post involving a Rachel Dolezal-type woman, there will be those nimrods who want to compare putting on makeup and having surgeries to try to become a black woman to being a transgender person. Before you even start banging on your keyboards trying to be witty and contrary, don’t embarrass yourself.

Mark Lamont Hill Goes Off On Ex-Cop Who Says Blacks Are Prone To Criminality...

Trump Makes Up African Country And Tells African Leaders His Friends Are ‘going to...