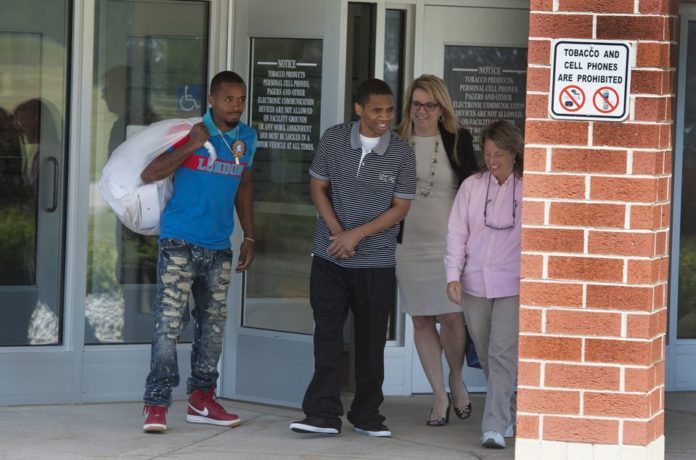 A Detroit man spent 9 years in prison because of 4 murder convictions only to have them all dismissed.

Now, he has filed a lawsuit against the city of Detroit, as well as two former investigators — Homicide Unit Commander James Tolbert and Detective Sgt. Michael Russell — who are accused of railroading Sanford into falsely admitting to crimes he never committed. Sanford, now 24, was an illiterate, learning-disabled 14-year-old at the time of his confession, reported MLive.

The 46-page lawsuit was filed Monday in Detroit federal court and claims Davontae Sanford walked out of his home early on Sept. 18, 2007, and asked Detroit police what was happening when they arrived to investigate a quadruple homicide on Runyon Street in Detroit that occurred the prior night.

Police decided Sanford was a suspect and took him in for  2 days of relentless questioning, the lawsuit says. The lawsuit also alleges Sanford was presented with a false confession written by Detroit police that contained details only known to the killers or investigators. The details of the false confession were to ensure a conviction against the innocent child.

Tolbert originally testified that Sanford drew and signed a diagram of the murder scene. But years later he admitted the diagram was actually drawn by police.

“The facts that have emerged since his wrongful conviction for these crimes have now proven that these officers ginned up evidence against Davontae, plain and simple,” says a statement issued by the law firms representing Sanford in the lawsuit, Detroit-based Goodman Hurwitz & James and New York-based Neufeld, Scheck & Brustin. Detroit police “dictated a confession to him, typed it out, and then had Davontae sign the statements, even though he was unable to read.”

Sanford pleaded guilty to four counts of second-degree murders as part of an agreement to avoid a possible life prison sentence — the mandatory sentence had be been convicted of first-degree murder. He received a sentence of between 39 and 40 years, reported MLive.

Just a week after Sanford’s sentencing, a hit man named Vincent Smothers admitted he and an accomplice actually committed the Runyon Street killings. Smothers was ultimately convicted of eight other murders, but the Wayne County Prosecutor’s Office never charged him with any crimes stemming from Runyon Street, even though he legitimately admitted to the murders.

Police chose to ignore the confession of the professional killer.

Police “either deliberately failed to investigate details that incriminated Smothers and undermined Davontae’s conviction, or did investigate such details and deliberately suppressed information that exculpated Davontae,” the lawsuit says.

Sanford’s attorney tried to get his conviction overturned based on Smothers’ admission.

“However, these efforts to prove Davontae’s innocence were repeatedly stymied by continued misrepresentations by (Detroit police and Wayne County prosecutors), who continued to assert Davontae’s guilt and fight his release in reliance on … misrepresentations that Davontae had voluntarily confessed and voluntarily reported non-public information” about the murders, a statement issued by Sanford’s attorneys on Tuesday said.

The lawsuit claims the Detroit Police Department was well aware of a pattern of unscrupulous behavior and alleged crimes committed by Tolbert, but chose to ignore them.

The incidents noted in the lawsuit include:

“Because of these actions by the Detroit Police Department, Davontae Sanford, an innocent child, spent the next almost 9 years in adult prison, often alone in solitary confinement, and there he lost his childhood in a living hell,” said Julie Hurwitz, one of Sanford’s attorneys.
(Article By Jeremiah Jones)