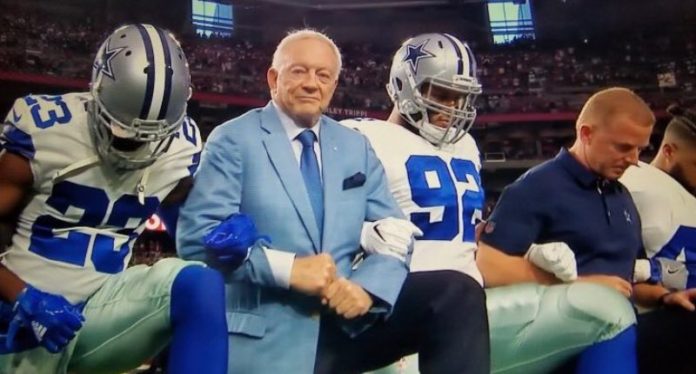 Not all the NFL owners are doing what Trump commands, at least 1 owner chose to openly defy him on Monday night football.

The owner of the Dallas Cowboys, Jerry Jones, took a knee with the rest of his team for the national anthem on Monday night in their game against the Arizona Cardinals, reported Raw Story.

The team, their coach Jason Garrett, and their owner stood with linked arms during the anthem itself, both moves in direct defiance of President Donald Trump’s suggestion to fire players who silently and peacefully protest police brutality during the anthem.

Jones previously supported Trump, even donating $1 million to his inauguration. He was also reportedly critical of players who “took a knee” prior to the president’s comments last Friday. Now he seems to have had a change of heart.

Watch the Cowboys’ protest below.

Show of unity the Dallas Cowboys and Jerry Jones took a knee together before the National Anthem tonight #MNF #DALvsAZ #Respect pic.twitter.com/idAilCdOBi