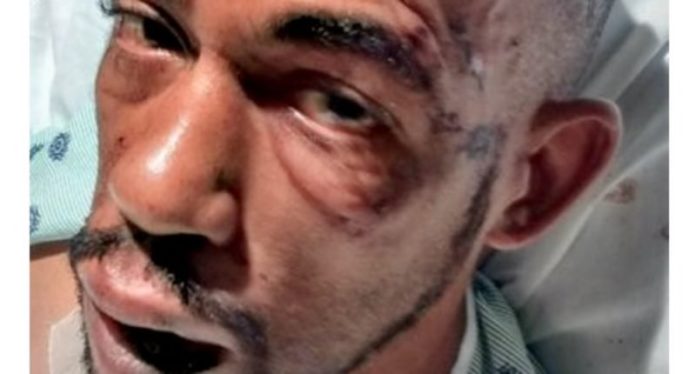 GLASSBORO, NJ – A man who alleges he was beaten by police officers two years ago when he was suffering from a seizure is now suing the borough, police department and officers who arrested him.

The suit, filed in federal court in Camden this week, also alleges that body camera footage shows the beating and disproves a previous account of the incident provided by police.

The man, Taharqa Dean, of Glassboro, was found lying on Reading Street in Glassboro having a seizure in September 2015.

Officers who arrived at the scene waited with Dean until paramedics loaded him into an ambulance. But the officers were again called to the scene when Dean loosened his restraints and tried to leave the ambulance, according to the complaint.

“The officer was standing with the double doors open, and the person (Dean) then gets up, stands up, completely unbelts himself, walks to the back of the ambulance, and assaults the officer,” former Glassboro Police Chief Alex Fanfarillo told NJ Advance Media in 2015. “That’s when he was taken to the ground, subdued and charged, ultimately.”

The video shows three more officers, besides the two who responded to him leaving the ambulance, “immediately began to join the assault on Dean,” according to the suit.

Police said an officer was bitten on his left thigh while another reported that Dean reached for an officer’s weapon. Dean was later charged with disarming an officer, two counts of assaulting a police officer and improper behavior. The charges were later dismissed.

Family members previously said that Dean did not know where he was and was behaving erratically due to his epilepsy.

“When he comes out of an epileptic seizure, he has no recollection whatsoever of the event,” his brother Kwsind Dean said in 2015. “He was starting to come out of it, and so all he knew was that someone had him in a vehicle taking him somewhere. It takes him at least 20 minutes to get his bearings back.”

Lawyer Stanley King, who filed the federal suit Thursday, has reviewed the bodycam footage. “I was troubled by what I saw,” he said Friday. “I don’t know how in good conscience any law enforcement officer could conduct themselves in that matter.”

Dean was unconscious in the hospital for a few days after the incident, his brother said.

The suit seeks $2 million in damages for bodily harm and excessive use of force by the officers.

The Glassboro Police Department did not immediately return requests for comment about the suit Friday.