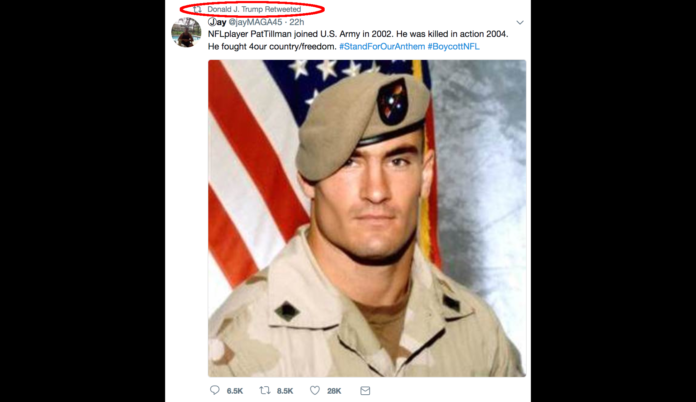 The president has caused quite a stir over the past few days with his tweet about how he believes the NFL should deal with players who chose to take a knee during the anthem.

In a tweet the President stated:
“Sports fans should never condone players that do not stand proud for their National Anthem or their Country. NFL should change policy!“

Sports fans should never condone players that do not stand proud for their National Anthem or their Country. NFL should change policy!

Ironically, however, when Trump’s job not the President of The United States, but that of a businessman who’s side gig was to blast then President Obama at every turn he tweeted:
“President should not be telling the Washington Redskins to change their name-our country has far bigger problems! FOCUS on them,not nonsense,”

President should not be telling the Washington Redskins to change their name-our country has far bigger problems! FOCUS on them,not nonsense

The President’s tweet seemed to have the opposite effect of what he intended and since then- “more than 130 professional football players at games across America have kneeled or locked arms during the national anthem to protest Donald Trump’s call to sack those who disrespected the Star Spangled Banner.”

Undeterred, he thought it would be a good idea to retweeted a meme featuring fallen soldier Pat Tillman, who was also a NFL star stating:

What Trump failed to know when he retweeted that meme in poor taste was that Tillman’s foundation has denounced the President and his policies as being in opposition of what the fallen soldier fought and died for.

Trump presumably did this to show the patriotism of a football player who didn’t kneel, but you won’t be surprised to learn Tillman almost certainly wouldn’t have supported this president’s policies.

Tillman was a proud atheist. Earlier this year, his widow Marie, who now runs the Pat Tillman Foundation, penned a Facebook message denouncing Trump‘s executive order banning refugees from Muslim-majority nations. She wrote of Tillman, “This is not the country he dreamed of, not what he served for and not what he died for.”

You would think someone with Tillman’s courage and not-merely-symbolic patriotism would fully support the actions of the athletes who took a knee in protest of police brutality, systemic racism, and a president who doesn’t give a damn about any of that.

ThinkProgress’ Rebekah Entralgoadds that “Those who served with Tillman in Iraq and Afghanistan say he was vehemently against former U.S. president George W. Bush and called the war ‘so fucking illegal.’”

Trump is accused of disgracing Tillman’s his memory by using the veterans “name and likeness to advance an agenda of discord and bigotry”.

Tillman’s politics were not Trump’s politics. Tillman died for this country because he believed in what it stood for, including freedom of speech and the right to peacefully protest.

What is your stance on professional athletes taking a knee during the anthem and the call to boycott the NFL for not forcing its players stand before the flag? One would think open displays of political opposition and dissent by a nation’s citizens is the ultimate expression of the freedoms for which veterans have fought for, but Trump and his supporters don’t seem to have made the connection.