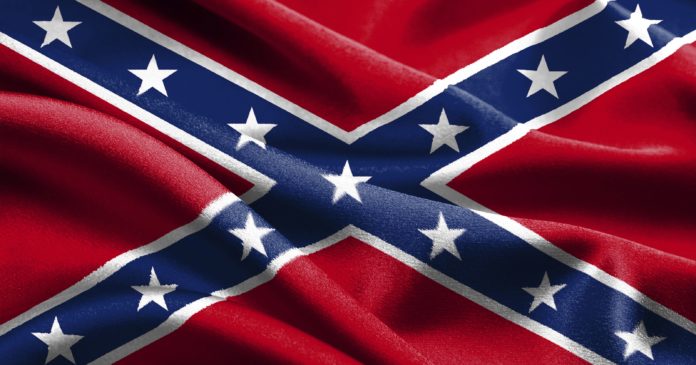 A California student thought it would be a good idea to wear a Confederate flag sweatshirt to school, and now his mother claims he’s a victim of racial bullying after classmates circulated a photo of him on social media with the caption “white power.” Of course she ignores that fact that many students consider the flag to be a symbol of slavery and racial bullying.

The mother of the student pulled her son out of school on Friday after she said threats were made against him, reported Raw Story.

She said she opposed the hashtag being used on the photo that was originally posted by another student.  She also ignores the ignorance shown by her son when he wore an obviously inflammatory symbol to school.

“The only reason the picture exploded was because of the hashtag used,” she said in an interview. “To me, this is ignorance. These people don’t know my son, he’s not racist.”

Principal Matt Shin said Friday afternoon, the student wearing the shirt was stopped by a group of students who questioned why he wore the shirt. An administration official saw the group and said that he would look into the issue and told students to go to class.

“In regard to dress code, with 2,300 students, we don’t always catch every kid,” Shin explained. “Before lunch, there were no reports to the office of any disruption to others.”

The principal then brought the student into his office where he swore he “wasn’t racist” and explained “he’s very much into the heritage of the south and has family there.” His mother then pulled him out of school for the day for his own safety.

“The reason he wore what he wore is that the flag represents more than slavery, it represents a lot of other things,” said his mother. “He’s not being racist. Everyone learns history differently.”

She sees no problem with wearing the symbol that means slavery, oppression, torture, and murder to many other students.

“It doesn’t mean slavery, to him,” she swore, going on that to their family his sweatshirt means freedom and Constitutional rights.

“School administration has met with student and his parent about the incident that took place on Friday and have worked to resolve the incident as well as to ensure that there will be no more similar incidents like it in the future,” the school district said in a statement Monday. “This entire incident is an educational reminder to all of us how the interpretations of different symbols and expressions can vary from person to person. It’s also a reminder to us that schools should always be a safe and inclusive place for students to learn and interact with one another.”

Why can’t people find a symbol of freedom and constitutional rights that does not represent slavery, oppression, torture, and murder to others?

Another Unarmed Black Man Fatally Shot At The Hands Of Police – Anti Media...